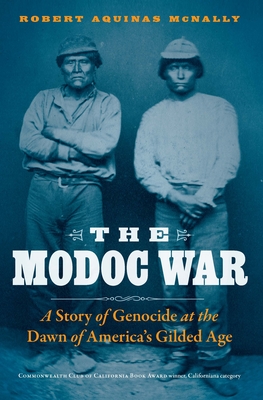 A Story of Genocide at the Dawn of America's Gilded Age

On a cold, rainy dawn in late November 1872, Lieutenant Frazier Boutelle and a Modoc Indian nicknamed Scarface Charley leveled firearms at each other. Their duel triggered a war that capped a decades-long genocidal attack emblematic of the United States’ conquest of Native America’s peoples and lands. Robert Aquinas McNally tells the wrenching story of the Modoc War of 1872–73, one of the nation’s costliest campaigns against North American Indigenous peoples, in which the army placed nearly one thousand soldiers in the field against some fifty-five Modoc fighters.
Although little known today, the Modoc War dominated national headlines for an entire year. Fought in south-central Oregon and northeastern California, the war settled into a siege in the desolate Lava Beds and climaxed the decades-long effort to dispossess and destroy the Modocs. The war did not end with the last shot fired, however. For the first and only time in U.S. history, Native fighters were tried and hanged for war crimes. The surviving Modocs were packed into cattle cars and shipped from Fort Klamath to the corrupt, disease-ridden Quapaw reservation in Oklahoma, where they found peace even more lethal than war.
The Modoc War tells the forgotten story of a violent and bloody Gilded Age campaign at a time when the federal government boasted officially of a “peace policy” toward Indigenous nations. This compelling history illuminates a dark corner in our country’s past.

Praise For The Modoc War: A Story of Genocide at the Dawn of America's Gilded Age…

"The Modoc War is a devastating history of defiant indigenous resistance during the Gilded Age of the nineteenth century. McNally's fast-paced, blow-by-blow account chronicles the daring actions of Modoc freedom fighters, treacherous U.S. soldiers, genocidal American settlers, and hubristic military leaders that scarred the West during the "Indian Wars" of the post–Civil War era. But this is more than simply a long-overdue accounting of broken treaties, broken promises, and tragic removal in California. McNally also shines a mirror at us, demanding a reckoning for the demographic and cultural genocide that occurred in the Klamath Basin and across the American West."—Natale A. Zappia, California History

"General readers and scholars interested in an excellent, detailed narrative history of the Modoc War will be well served by McNally's work."—Brendan Lindsay, Western Historical Quarterly

"McNally is a strong storyteller with a conversational style and an eye for telling details. . . . This honest accounting of the cruelty, corruption, and savagery of the settlers—who believed their actions were smiled upon by God—takes a step forward in correcting a sanitized and muffled history."—Publishers Weekly

"The Modoc War was as much a media narrative as it was a historical event. What made and continues to make the Modoc War compelling in this sense is that it was among the first such narratives to be reported in real time through the then-novel technology of the telegraph, photography, and mass-produced newspapers—presaging much of our media landscape today."—Mark Axel Tveskov, Oregon Historical Quarterly

"McNally's The Modoc War uses the power of hindsight to characterize historical subjects in thematic fashion, revealing deeper motivations behind the heartrending war in the Lava Beds."—Ishmael Elias, News from Native California

"McNally provides an excellent background to the events leading to the war. . . . This is a sad tale of stereotyping Indians as savages; bureaucratic insensitivity; and Indian resistance to injustice, well told in a compelling narrative."—Abraham Hoffman, Roundup Magazine

"This volume provides the historical and cultural context of the Modoc war in great detail."—Steven C. Haack, Journal of America's Military Past

"Robert Aquinas McNally's storytelling talent is on full display in this history of the Modoc War, a violent conflict on the Oregon-California border in 1872–1873. . . . [The Modoc War deserves] a prominent place in the literature on frontier Indian wars and exemplifies a well-researched, engaging narrative technique."—William S. Kiser, Journal of American History

"An excellent addition to Robert McNally's body of work."—Tombstone Epitaph

“From the opening scene to the end, The Modoc War unfolds with an unrelenting pace and engaging immediacy. One rarely comes across a historical account written with such verve, truly deserving to be called a page-turner. Here is ethnohistory at its best, an accounting of Indian-white relations from multiple perspectives.”—James J. Rawls, author of Indians of California: The Changing Image

“Robert McNally’s page-turning The Modoc War is one of the finest books ever written on this tragic history.”—Benjamin Madley, author of An American Genocide: The United States and the California Indian Catastrophe, 1846–1873

“Robert McNally’s history of the Modoc War, convincingly told from engrossing start to finish, tells the story of an American tragedy, but not without powerfully illustrating the nobility and endurance of the people who suffered it.”—Greg Sarris, chairman of the Federated Indians of Graton Rancheria and author of Grand Avenue and Watermelon Nights

“Well paced, with vividly drawn characters and exciting, dramatic prose, Robert Aquinas McNally’s narrative history of the Modoc War is the most thoroughly researched and historically accurate account of that tragedy to date. A tour de force of historical storytelling, The Modoc War is an insightful exploration of one of America’s most important but forgotten Indian wars.”—Boyd Cothran, author of Remembering the Modoc War: Redemptive Violence and the Making of American Innocence

Robert Aquinas McNally is a freelance writer and editor based in Concord, California. He is the author or coauthor of nine nonfiction books, including So Remorseless a Havoc: Of Dolphins, Whales, and Men.
Loading...
or support indie stores by buying on