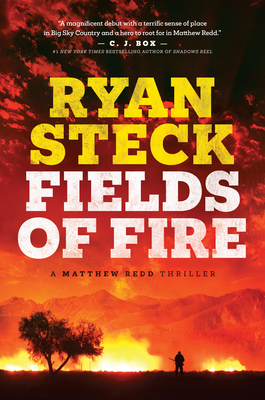 "You know Ryan Steck as the Real Book Spy. Now, get to know him as the author of Fields of Fire, his debut thriller featuring Marine Raider Matthew Redd in a battle that will leave you speechless and begging for more. Lock and load " --Jack Carr, Navy SEAL Sniper and #1 New York Times bestselling author of The Devil's Hand

Waiting to be deployed on a critical mission, elite Marine Raider Matthew Redd stops to help a stranger and wakes up hours later to learn his team was wiped out in an ambush. Unable to remember anything, Redd can't deny the possibility that he's somehow responsible for the information leak that led to the massacre. He's given a deal to avoid a charge of treason, but it means walking away from the Corps and the life he loved.

As he faces his loss, Matty gets a cryptic message from his adoptive father, J. B.: "Trouble's come knocking. . . . Might need your help." He points his truck home to rural Montana, only to discover that J. B. is dead and the explanation for his death is far from satisfying. Determined to dig up the truth, Redd uncovers a dark global conspiracy with his hometown at the center and no team at his back--except one he might find among past friends, old enemies, and new allies, if he can figure out who to trust.