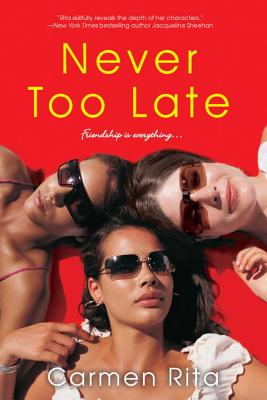 They’ve had each other’s backs through major changes—and maximum bad news. But now Cat, Magda, Gabi, and Luz find unexpected drama from their pasts threatening their bond, along with everything they've fought to build.

Always upfront and out-there in her career, Cat won big with her solo online interview show. However, risking romantic commitment will mean confronting her deepest fears—and a stunning secret.

Hotshot investor Magda finally has a stable, happy life. But with her worst mistake about to go viral, how far will she push a friend—and break the rules—to stop it?

It took a lot of self-help for sensitive therapist Gabi to start over. A sizzling new love now offers some straight-up delicious healing—but honesty can be one dangerous illusion...

Wealthy socialite Luz will do whatever it takes to care for her newfound teenage half-sister. But a life-changing choice is putting more than their still-fragile relationship on the line...

Now what these close friends don't know about each other will test everything they believe about themselves. And finding the courage to understand and the strength to forgive will be their only chance to come to terms, move on—and live for real.

“Rita's debut novel reads a bit like a multicultural edition of Sex and the City…Brimming with smart dialogue and ricocheting plot twists.” --Kirkus Reviews

“This deliciously fun read is perfect for fans of Kimberla Lawson Roby or Jennifer Weiner.” --Booklist

Carmen Rita is CEO and founder of a multimedia content company. A successful entrepreneur, she was one of the few Latinas on American television to host a daily national news program, CNBC’s On the Money, and has been a national advice columnist for Glamour, Latina, Essence, Men's Health and Good Housekeeping, as well as an expert with NBC’s Today Show, MSNBC, CNN, CBS This Morning, a regular on ABC’s The View ​and has written for ​The New York Times and Parade. A guest of the White House as a member of President Obama’s ‘Business Forward’ initiative to further African-American, Latino and Asian business owners, Carmen was also a faculty professor at New York University and is the author of two best-selling financial advice books, including The Real Cost of Living. A seasoned speaker, moderator and native New Yorker, Carmen serves on the board of several nonprofit organizations and most-importantly, is ‘Mami’ to a young daughter and rescue pooch. Visit her on the web at www.carmenrita.com and find her on Twitter at @CarmenSense.
Loading...
or
Not Currently Available for Direct Purchase