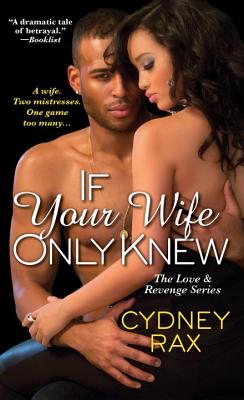 If Your Wife Only Knew (Love & Revenge) (Mass Market)

“A dramatic tale of betrayal.” —Booklist

In this scandal-filled series, Cydney Rax delivers a sexy tale of a doubting wife, a seductive challenge, and explosive consequences no one will ever see coming…

Something's wrong with her perfect marriage, but Kiara Eason isn't sure what. Her ambitious husband, Rashad, is the last person who’d ever cheat—and she never imagined she'd stray. Still, why is she confiding so much in her handsome co-worker, Eddison?  And why is she wondering what would happen if she put her marriage to the ultimate test—secretly setting Rashad up with a younger woman to see if he's tempted?...


“Secrets, scandal, betrayal and revenge—there are no clean hands in the first book of this saga.” —RT Book Reviews