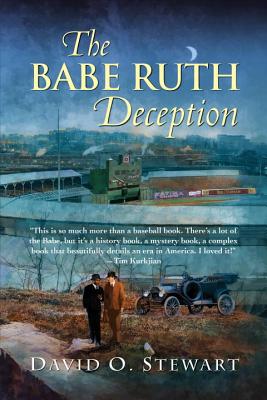 The Babe Ruth Deception (A Fraser and Cook Mystery #3)

As the Roaring Twenties get under way, corruption seems everywhere—from the bootleggers flouting Prohibition to the cherished heroes of the American Pastime now tarnished by scandal. Swept up in the maelstrom are Dr. Jamie Fraser and Speed Cook . . .

Babe Ruth, the Sultan of Swat, is having a record-breaking season in his first year as a New York Yankee. Larger than life on the field and off, Ruth is about to discover what the Chicago White Sox players accused of throwing the 1919 World Series are learning—baseball heroes are not invulnerable to scandal. With suspicion in the air, Ruth’s 1918 World Series win for the Boston Red Sox is now being questioned. Under scrutiny by the new baseball commissioner and enmeshed with gambling kingpin Arnold Rothstein, Ruth turns for help to Speed Cook—a former professional ballplayer himself before the game was segregated and now a promoter of Negro baseball—who’s familiar with the dirty underside of the sport.

Cook in turn enlists the help of Dr. Jamie Fraser, whose wife Eliza is coproducing a silent film starring the Yankee outfielder. Restraint does not come easily to the reckless Ruth, but the Frasers try to keep him in line while Cook digs around. As all this plays out, Cook’s son Joshua and Fraser’s daughter Violet are brought together by a shocking tragedy. But an interracial relationship in 1920 feels as dangerous as a public scandal—even more so because Joshua is heavily involved in bootlegging. Trying to protect Ruth and their own children, Fraser and Cook find themselves playing a dangerous game . . .

PRAISE FOR DAVID O. STEWART AND THE LINCOLN DECEPTION

“More than enough to satisfy any reader of historical whodunits.”—The Washington Post

David O. Stewart is the author of several works of history, most recently Madison’s Gift: Five Partnerships That Built America, which have been awarded the Washington Writing Award and the Society of the Cincinnati History Prize. He lives in Maryland and his website is at www.davidostewart.com.
Loading...
or
Not Currently Available for Direct Purchase