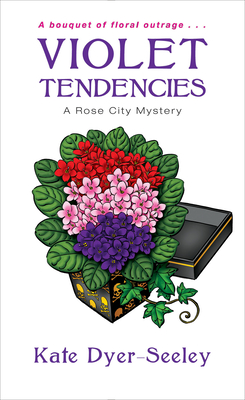 Who could object to a flower festival?

Britta Johnston and her aunt Elin are delighted that their Portland floral boutique is part of the city’s Rose Festival, which draws thousands to the Pacific Northwest for dragon boat races, fireworks, and other attractions—capped off by a big parade. They’re building a float that’s sure to rock the judge’s boat . . . until a gang of angry protestors shows up. The group, who call themselves Dark Fusion, are decidedly not into flower power, and they want to take down the system . . . including the upcoming extravaganza.

Then their leader is strangled with a garland of violets—and Britta finds the body. With tensions running high and so much at stake, there are plenty of suspects, from the Grand Marshal to a longtime volunteer to a former Rose Queen. But before Britta and Elin can stem the violence, the case is going to get even more explosive . . .

Kate Dyer-Seeley is  the author of Scene of the Climb, Slayed on the Slopes, Silenced in the Surf, First Degree Mudder, and In Cave Danger in the Pacific Northwest Mystery series, as well as the memoir Underneath the Ash. Her writing has appeared in Climbing Magazine, The Oregonian, The Columbian, Portland Family Magazine, and The Vancouver Voice. She is an active member of the Willamette Writers Association and the Pacific Northwest Writers Association. Visit her website at katedyerseeley.com.
Loading...
or
Not Currently Available for Direct Purchase