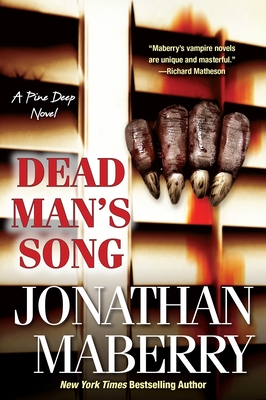 From the powerful imagination of a new horror master comes a bone-chilling tale set in a small town where good and evil are joined in a terrifying, deadly battle. . .

Once an idyllic Pennsylvania village, Pine Deep awoke one morning to find itself bathed in a massive bloodletting. Twice in thirty years the townsfolk have endured the savage hungers of a murderous madman. . .but if the residents think the death of serial killer Karl Ruger put an end to the carnage, they're dead wrong.

Bodies mutilated beyond description, innocents driven to acts of vicious madness. A monstrous evil is preying on the living--and the dead--and turning the quiet little town into hell on earth. Their only hope is to find the source. But the secrets that lurk in the heart of Pine Deep are twisted into its very roots. This time the townspeople aren't just fighting for their lives, but for their very souls. . .

"If I were asked to select only one new voice in horror fiction to read today, it would be Jonathan Maberry." --Katherine Ramsland

"Maberry takes us on another roller coaster ride through the cursed town of Pine Deep. You might want to keep the night light on for this one. Really." --Laura Schrock Emmy Award-winning writer/producer

"A fabulously written novel that grips you from its first line to its last. Jonathan Maberry's writing runs from dark and beautiful to sharp and thought-provoking, and his books should be on everyone's Must-Read list." --Yvonne Navarro author of Mirror Me, AfterAge, Hellboy, Elektra, Buffy the Vampire Slayer: Tempted Champions, Species, Species II, Aliens: Music of the Spears, and Ultraviolet

Jonathan Maberry is a New York Times bestselling and five-time Bram Stoker Award–winning horror and thriller author, editor, comic book writer, magazine feature writer, playwright, content creator, and writing teacher/lecturer. He was named one of the Today's Top Ten Horror Writers by Horror Novel Reviews. His award-winning young adult novel Rot & Ruin is an American Library Association top pick. His novels Extinction Machine and V-Wars are in development for TV, and Rot & Ruin is being developed for film. His books have been published in more than two dozen countries. He lives in Southern California. Readers are invited to visit him on Facebook and at jonathanmaberry.com.
Loading...
or
Not Currently Available for Direct Purchase