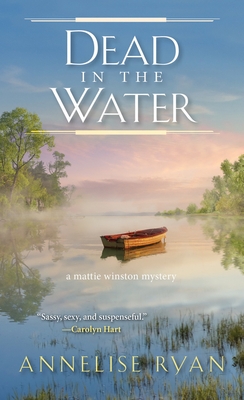 Dead in the Water (A Mattie Winston Mystery)

As a single mom and deputy coroner of Sorenson, Wisconsin, Mattie Winston is used to her life being a juggling act. But now that she’s moved in with Detective Steve Hurley and his teenaged daughter, and has started planning their wedding, her home life is looking more like a three-ring circus. At least her workload at the Medical Examiner’s office is lightened by the new hire Hal Dawson. But before Hal can even cash his first paycheck, he’s murdered on a fishing trip with his girlfriend, who’s gone missing. To keep her life from going completely under, Mattie will have to dive deep for clues. But a killer is just as determined to keep the truth from ever surfacing . . .

“The funniest deputy coroner to cut up a corpse since, well, ever.”
—Laura Levine

“Has it all: suspense, laughter, a spicy dash of romance...”
—Tess Gerritsen

Annelise Ryan is the pseudonym for the author of the Mattie Winston Mystery series and another mystery series under the name of Allyson K. Abbott. She has written more than 200 published articles, worked as a book reviewer for Barnes & Noble, and is an active member of Mystery Writers of America and International Thriller Writers. She currently works as a registered nurse in an ER. She can be reached at www.mattiewinston.com.
Loading...
or
Not Currently Available for Direct Purchase