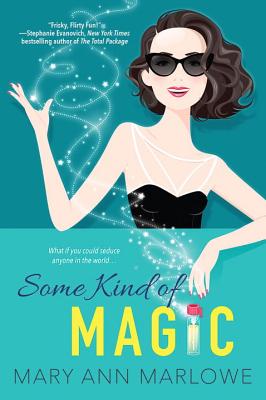 Some Kind of Magic (Flirting with Fame #1)

In this sparkling debut novel, Mary Ann Marlowe introduces a hapless scientist who’s swept off her feet by a rock star—but is it love or just a chemical reaction?...

Biochemist Eden Sinclair has no idea that the scent she spritzed on herself before leaving the lab is designed to enhance pheromones. Or that the cute, grungy-looking guy she meets at a gig that evening is Adam Copeland. As in the Adam Copeland—international rock god and object of lust for a million women. Make that a million and one. By the time she learns the truth, she’s already spent the (amazing, incredible) night in his bed…

Suddenly Eden, who’s more accustomed to being set up on disastrous dates by her mom, is going out with a gorgeous celebrity who loves how down-to-earth and honest she is. But for once, Eden isn’t being honest. She can’t bear to reveal that this overpowering attraction could be nothing more than seduction by science. And the only way to know how Adam truly feels is to ditch the perfume—and risk being ditched in turn…

Smart, witty, and sexy, Some Kind of Magic is an irresistibly engaging look at modern relationships—why we fall, how we connect, and the courage it takes to trust in something as mysterious and unpredictable as love.

Praise For Some Kind of Magic (Flirting with Fame #1)…

Praise for  Mary Ann Marlowe's Some Kind of Magic:

“Marlowe makes a name for herself in this hilarious and sexy debut…It’s filled with frisky sexy scenes set to the backdrop of rock music, and Marlowe makes the chemistry scientific and literal in this fun read.”– Booklist STARRED REVIEW

“Fun, flirty read about a magical romance…a lighthearted pick me up. Eden and Adam’s chemistry was so electric – I rooted for them the whole way! – FIRST for Women

“This love potion romance, which pairs up the lead singer for a rock band with a biochemist who’s also an amateur singer/songwriter, is light and fluffy.” - Publishers Weekly

“This fun, romantic and sexy novel explores the instant connection that manifests between two people and what happens next. The chemistry between Adam and Eden is instant and electric, and watching them bring out the best in each other gives the story warmth along with the heat…..This love story will make readers smile!”- RT Book Reviews

“Sexy, engaging and original.  I completely fell in love with Eden and Adam.  An amazing first novel.” – Sydney Landon, New York Times bestselling author of Wishing For Us

“Marlowe is a deft, compelling writer with a modern, confident voice. I got swept up completely in Eden’s journey….Through the layering of detail and humanity, Marlowe manages to take a seemingly outlandish premise and make it real.... And through it all she weaves a beautiful love story that you can’t help but champion! A smartly-written, entertaining debut!!” –Robinne Lee, author of The Idea of You

When not writing, Mary Ann Marlowe works by day as a computer programmer/DBA and loves to travel. She spent ten years as a university-level French professor, and her resume includes stints as an au pair in Calais, a hotel intern in Paris, a German tutor, a college radio disc jockey, and a webmaster for several online musician fandoms. She grew up on the outskirts of Indianapolis and has lived in twelve states and three countries. She now lives in central Virginia where she is hard at work on her next novel. She loves to hear from readers and can be reached through her website at www.maryannmarlowe.com, on Facebook, www.facebook.com/marlowemaryann/, and at twitter.com/maryannmarlowe.
Loading...
or support indie stores by buying on