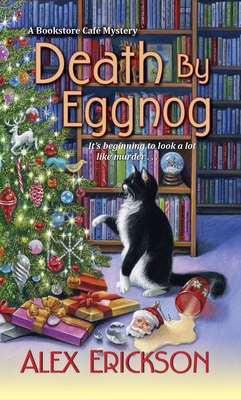 Krissy Hancock is staying in her adopted hometown of Pine Hills, Ohio, for Christmas this year—and she even has a whole week off from her combination bookstore-café. But a killer is about to dampen her spirits . . .

Unfortunately, Krissy’s been roped into filling in for a sick elf in the local holiday musical extravaganza. With a demanding director, backstage gossip, and two men in fierce competition for the starring role, it isn’t all sweetness and Christmas lights. Then a murder puts a stop to the production, and Krissy is faced with a pageant of suspects.

Could her ex-boyfriend, a fellow elf, really be the culprit as the police are claiming? Or will the actor playing Santa be trading his red suit for an orange jumpsuit? When her behind-the-scenes investigation starts getting dangerous, the only thing Krissy really wants is to make it to Christmas dinner alive. But first she’ll have to finish wrapping up this case . . .

Alex Erickson has always wanted to write, even at a young, impressionable age. He’s always had an interest in the motive behind murder, which has led him down his current path. He’s always ready with a witty—at least in his opinion—quip, and tries to keep every conversation light and friendly. Alex lives in Ohio with his family and resident felines, who provide endless amounts of inspiration. You can visit him on Twitter at twitter.com/AEricksonbooks and on Facebook at: www.facebook.com/alexericksonbooks.
or
Buy Here
Copyright © 2020 American Booksellers Association