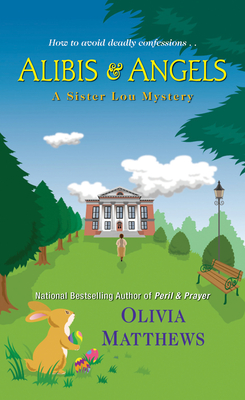 With the Lenten season fast approaching, Sister Louise “Lou” LaSalle looks forward to a final day of indulgence before giving up her favorite sweets. But one Briar Coast resident won’t get the chance to repent. Opal Lorrie, the mayor’s director of finance, was just found in the parking lot of the Board of Ed--with a broken neck.

The sheriff’s deputies are calling the apparent slip-and-fall a freak accident. But Opal was driving her boss’s car and wearing her boss’s red wool coat. Mayor Heather Stanley has been receiving threatening letters and is clearly the real target. Offering her sanctuary could put the Congregation of the Sisters of St. Hermione of Ephesus at risk, but how can Sister Lou turn her back on a neighbor in need? Aided by her loyal sleuthing partners—her well-connected nephew Chris and reporter Shari Henson—Sister Lou must confront the mayor’s myriad detractors during this critical election year. And as the first day of April nears, it’s up to her to unmask an unrepentant killer who has everyone fooled.

Olivia Matthews is the cozy mystery pseudonym of national best-selling author Patricia Sargeant. A voracious reader, Patricia has been inspired by writers such as Walter Mosley, Dick Francis and Tami Hoag, who put ordinary characters in extraordinary situations. Her Sister Lou character was inspired by Catholic sisters whose courage, determination and faith have helped build communities and formed rich, lasting legacies. Patricia loves to hear from readers. You can reach her at BooksByPatricia@yahoo.com. Visit her Olivia Matthews website, AuthorOliviaMatthews.com, and sign up for her enewsletter to learn about upcoming releases and events.
Loading...
or support indie stores by buying on