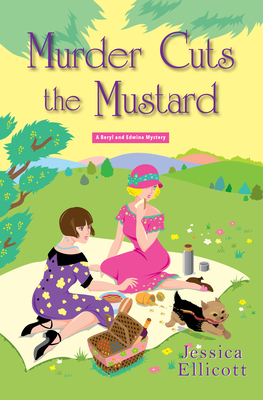 Murder Cuts the Mustard (A Beryl and Edwina Mystery #3)

The latest occurrence to disturb the peace in the quaint English village of Walmsley Parva hits rather too close to home—in fact, the prime suspect has taken up residence in Edwina's potting shed. Her elderly gardener Simpkins has been secretly sleeping there after a row with his disreputable brother-in-law and housemate, Hector Lomax.

When Hector is found murdered in the local churchyard, Constable Gibbs comes looking for Simpkins, who was last seen arguing with his kin in the pub the night before. Based on the sad state of her garden, Edwina has grave doubts that the shiftless Simpkins could muster the effort to murder anyone. The two sleuths throw themselves into weeding out suspects and rooting out the real killer.

But this is no garden variety murder. The discovery of a valuable ring, a surprise connection to Colonel Kimberly's Condiment Company, and a second homicide all force Beryl and Edwina to play catch-up as they relish the chance to contain the culprit . . .

Praise for MURDER FLIES THE COOP

“Captivating . . . Ellicott smoothly injects such serious issues as the impact of WWI on its survivors and the restrictions of the English class system into a light whodunit.”
—Publishers Weekly

Praise for MURDER IN AN ENGLISH VILLAGE

“Well-drawn women of a certain age, plot twists, and details of wartime and postwar Britain distinguish this historical cozy, which will appeal to fans of Frances Brody's Kate Shackleton and Kerry Greenwood's Phryne Fisher.”
—Booklist

“With its strong sense of place and time in post-World War I England, this will be welcomed by fans of Frances Brody's Kate Shackelton mysteries.”
—Library Journal, starred review

Jessica Ellicott is the author of Murder in an English Village and Murder Flies the Coop in the Beryl & Edwina Mystery series. She loves fountain pens, Mini Coopers, and throwing parties. She lives in northern New England where she obsessively knits wool socks and enthusiastically speaks Portuguese with a shocking disregard for the rules of grammar.
Loading...
or support indie stores by buying on