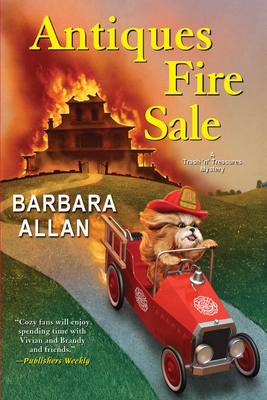 The award-winning, laugh-out-loud adventures of antiques dealers Brandy Borne and her drama-queen mom Vivian have made Trash 'n' Treasures "one of the funniest cozy series going" (Ellery Queen Mystery Magazine). In the latest installment, after flames consume a historic mansion full of priceless treasures, along with its occupant, the question arises: who charred the corpse? Brandy and Vivian are on the case in their fourteenth Trash 'n' Treasures Mystery!

That local theater diva of a certain age, Vivian Borne--a.k.a. Brandy's mother--is sheriff of Serenity County now, but still hot on the trail of precious antiques. On a tour of the historic Wentworth Mansion, the two dedicated dealers are aglow at the treasure trove of priceless objects...never dreaming everything will turn to ashes, hours later.

A charred corpse in the ruins is identified as the mansion's caretaker, a one-time flame of Vivian's. But Tony Cassato--Brandy's beau and Serenity's Chief of Police--throws cold water on Sheriff Vivian's suspicions of murder. Then Brandy spots a certain familiar item for sale on the internet, and Mother suspects the fire was just a smoke screen.

When their doggie detective, Sushi the Shih Tzu, sniffs out a second body in the woods, Mother and Brandy turn up the heat on a homicidal torcher. Because any killer who takes on the Borne girls is playing with fire.

Barbara Allan is the joint pseudonym of acclaimed short story writer Barbara Collins (Too Many Tomcats) and New York Times bestselling mystery novelist Max Allan Collins (Road to Perdition). Their previous collaborations have included one son, a short story collection, and eleven novels, including the 2008 winner of the Romantic Times Toby Bromberg Award for Most Humorous Mystery, Antiques Flee Market. They live in Iowa in a house filled with trash and treasures. Learn more about them at www.maxallancollins.com and www.barbaraallan.com.
or support indie stores by buying on
Copyright © 2020 American Booksellers Association