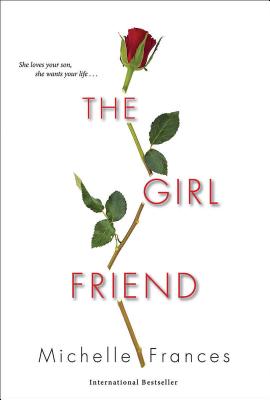 A mother. A son. His girlfriend. And the lie they’ll wish had never been told.

Laura has it all. A successful career, a long marriage to a rich husband, and a twenty-three year-old son, Daniel, who is kind, handsome, and talented. Then Daniel meets Cherry. Cherry is young, beautiful and smart but hasn’t led Laura’s golden life. And she wants it.

When tragedy strikes, a decision is made and a lie is told. A lie so terrible it changes their lives forever…

The Girlfriend is a taut and wickedly twisted debut psychological thriller—a novel of subtle sabotage, retaliation, jealousy and fear, which pivots on an unforgivable lie, and examines the mother–son–daughter-in-law relationship in a chilling new light.

Praise For The Girlfriend…

Praise for The Girlfriend

“One of the best books I’ve read in a long, long time.  I loved The Girlfriend!”
—Lisa Jackson, New York Times bestselling author

“A juicy thriller and utterly compulsive reading.”
—Jenny Blackhurst, author of How I Lost You

“An original and chilling portrayal of twisted relationships.”
—Debbie Howells, author of The Bones of You

Michelle Frances graduated from Bournemouth Film School in 1996 and then from the Masters program at the American Film Institute, Los Angeles, in 1998. Returning to London, she has worked in film and TV for 16 years as a script editor and producer. She is currently Head of Development at BBC Wales Drama, producers of Doctor Who, War and Peace and Sherlock. She works across a number of in-house shows and also oversees book adaptations. The Girlfriend, her debut psychological thriller, has been optioned by The Imaginarium Studios and translation rights have sold in nine foreign territories.
Loading...
or
Not Currently Available for Direct Purchase