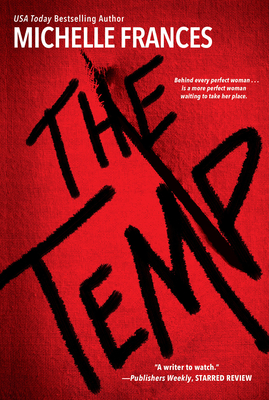 Emma would do anything to work for the woman who has the job she wants. Carrie is at the top of her game, with a dream career, a baby on the way, and a handsome screenwriter husband. For Emma, with parents who don’t understand her ambition and a serious misstep behind her, this temp position might be her last chance.

Carrie has given up more than anyone knows to get to the top of a ruthless business. She won’t give up this baby too. But with Emma filling in for her at the office, her perfect life starts to unravel.  Her bank account is inexplicably overdrawn, her husband seems strangely distant and colleagues are all too happy to take Emma’s creative direction. Carrie finds herself dying to get back to work . . . until a letter left at her door changes everything.

Trust and fear trade places in a love triangle that defies readers’ expectations at every turn.


“An outstanding psychological thriller. . . . Frances, who keeps the suspense high as the action accelerates toward the shattering finale, reinforces her position as a writer to watch.”
—Publishers Weekly, STARRED REVIEW

“The push and pull of characters who work to succeed from different angles create a story abounding with mysteries, revelations, and lies, making this novel one of a kind.”
—Library Journal

“Another solid psychological thriller from Frances, herself a former script editor and producer.”
—Booklist

Bestselling author Michelle Frances graduated from Bournemouth Film School, Bournemouth, and then from the Masters program at the American Film Institute, Los Angeles. Returning to London, she has worked in film and TV for several years as a script editor and producer for both the independent sector and BBC Wales Drama, producers of Doctor Who, War and Peace and Sherlock. The Girlfriend, her debut psychological thriller, has been optioned by Imaginarium Studios and translation rights have sold in sixteen foreign territories.

Praise For The Temp…

Praise for The Girlfriend

“One of the best books I’ve read in a long, long time.  I loved The Girlfriend!"
—Lisa Jackson, New York Times bestselling author

“A juicy thriller and utterly compulsive reading.”
—Jenny Blackhurst, author of How I Lost You

“An original and chilling portrayal of twisted relationships.”
—Debbie Howells, international bestselling author of The Bones of You

“I was blown away. The Girlfriend is the most marvelous psychological thriller.”
—Jilly Cooper, The Sunday Times #1 bestselling author