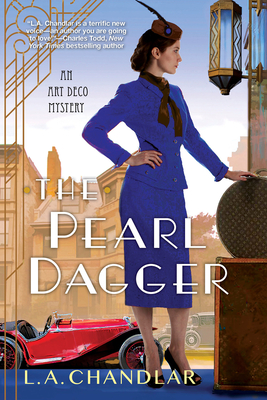 As the Great Depression loosens its grip on New York City, Mayor La Guardia and his team meet their greatest foe in the fight against organized crime …

Lane Sanders and her fiery boss, Mayor Fiorello “Fio” La Guardia have managed to contain the explosive underground conspiracies of New York’s most sinister schemers. But after a seemingly harmless pinball racket claims the life of a trusted ally, a new ringleader signals the rebirth of an all-too-familiar crime network at home and across the pond …

Spurred on by the possibility of a violent syndicate spreading like wildfire through Europe, Lane sets sail for London—the city where her parents began the undercover work that led to their tragic undoing. And this time, she won’t chase down childhood nightmares without Finn Brodie, who vows to dispel his own difficult secrets abroad …

While Finn confronts a devious sibling’s plot that echoes Orson Welles’s Voodoo Macbeth, Lane discovers that a dazzling pearl dagger may wield the ultimate clue to guide their hunt for justice on two sides of the ocean. With terrors from the past and present converging, Lane can’t save herself unless she starts believing that, like her weapon of choice, she also has the power to be both beautiful and dangerous.

Agatha Award nominee L.A. Chandlar is an author and motivational speaker on The Fight to Keep Creativity Alive, demystifying creativity in the workplace and personally. She lives in New York City with her family. Visit her at lachandlar.com.
Loading...
or support indie stores by buying on