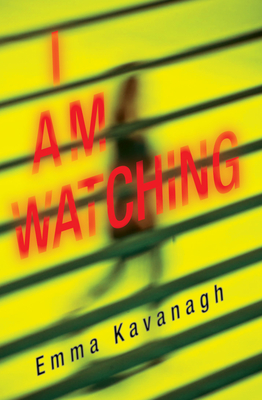 I Am Watching (Hardcover)

"The red herring-filled conclusion should surprise even the most careful reader. In Kavanagh's capable hands, the familiar plot of serial-killer-strikes-again is given a fresh and complex feel, complete with several truly sneaky twists."
—Kirkus Reviews

"Smart, fierce, and absorbing, this is a novel that begs to be read deep into the night."
—Foreward Reviews

"A solid psychological thriller by a former police and military psychologist."
—Booklist

From a distance, they seem to be sleeping. Three bodies, sitting propped up against the ancient stones of Hadrian’s Wall. A closer look reveals the horror of their too-white faces, and the ring of vivid red bruises around each neck.

The victims were found by schoolgirl Isla Bell, out on an early morning run along the historic site. That day changed the small, close-knit community of Briganton forever, and it also shaped the course of Isla’s life. Twenty years later, she’s a professor of criminal psychology at the University of Northumberland. She specializes in studying the brain function of psychopaths and serial killers, wrestling with the question that still haunts her: why? Why did Heath McGowan kill those people—and two more besides—before he was finally caught by Isla’s police detective father?

At last, Isla has a chance to get answers. Heath, previously unforthcoming about the murders, agrees to take part in her research. Isla’s husband, Ramsey—the only one of Heath’s victims to survive—cautions her against the meeting. But no matter how ready Isla feels to peer within a killer’s mind, there is no way to prepare for the fresh horror about to engulf Briganton. Another body is found, displayed just as
before . . . and then another. Is this a copycat, someone inspired by or receiving help from the serial killer behind bars? Or could the truth be darker still?

A brilliantly twisted thriller—gripping, atmospheric, and skillfully layered, I Am Watching will keep readers guessing until the very end.

Emma Kavanagh is the acclaimed UK bestselling author of The Missing Hours. Born and raised in South Wales, she is a former police and military psychologist. After completing her PhD, Emma began her own consultancy business, providing training to police and military across the UK and Europe. She taught police officers and NATO personnel about the psychology of critical incidents, terrorism, body recovery and hostage negotiation. She has run around muddy fields taking part in tactical exercises, has designed live fire training events, has been a VIP under bodyguard protection and has fired more than her fair share of weapons. She is married with two small sons and considers herself incredibly privileged to get to make up stories for a living.

Praise For I Am Watching…

Praise for Emma Kavanagh and The Missing Hours


“Kavanagh tells the story with great verve, weaving the strands of her story expertly . . . reminds me of a young Dame Ngaio Marsh.”
—Daily Mail

“A born storyteller with room to grow.”
—Publishers Weekly

“Sensationally ensnares its readers, this time into a tale of ransom, woe and disrepute.”
—Vogue
or support indie stores by buying on
Copyright © 2020 American Booksellers Association