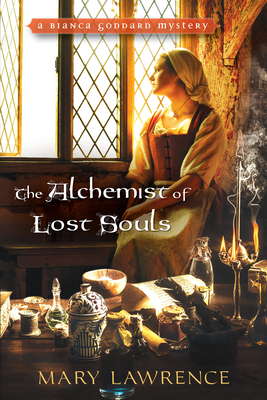 The Alchemist of Lost Souls (A Bianca Goddard Mystery #4)

A dangerous element discovered by Bianca Goddard’s father falls into the wrong hands . . . leading to a chain of multiple murders.

Spring 1544: Now that she is with child, Bianca is more determined than ever to distance herself from her unstable father. Desperate to win back the favor of King Henry VIII, disgraced alchemist Albern Goddard plans to reveal a powerful new element he's discovered—one with deadly potential. But when the substance is stolen, he is panicked and expects his daughter to help.

Soon after, a woman's body is found behind the Dim Dragon Inn, an eerie green vapor rising from her breathless mouth. To her grave concern, Bianca has reason to suspect her own mother may be involved in the theft and the murder. As her husband John is conscripted into King Henry's army to subdue Scottish resistance, Bianca must navigate a twisted and treacherous path among alchemists, apothecaries, chandlers, and scoundrels—to find out who among them is willing to kill to possess the element known as lapis mortem, the stone of death . . .

Praise for Death at St. Vedast

Mary Lawrence lives in Maine and worked in the medical field for more than twenty-five years before publishing her debut mystery, The Alchemist's Daughter (Kensington, 2015). The book was named by Suspense Magazine a "Best Book of 2015" in the historical mystery category. Her articles have appeared in several publications, including the national news blog The Daily Beast. She has also written Death of an Alchemist and Death at St. Vedast in the Bianca Goddard mystery series. Visit the author at www.marylawrencebooks.com.
Loading...
or
Not Currently Available for Direct Purchase