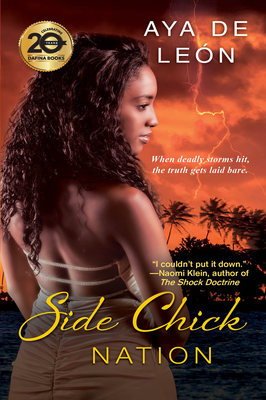 She’s beautiful, unpredictable—and on the run. But this ex-side chick is ready to risk everything to help others in trouble . . .

Dulce García was a teen sexually exploited by a violent New York pimp until Marisol Rivera rescued her. But Dulce didn’t stay rescued for long. Her unhealed trauma and appetite for thrills lead her into an endless party of sugar daddies in the Caribbean. Until she gets caught in Hurricane Maria in Puerto Rico—and witnesses the heartbreaking disaster of climate change, as well as the international vultures who plunder the tragedy for a financial killing, making shady use of relief funds to devastate the island even more.

Meanwhile, New York-based mastermind thief Marisol has her hands full fleecing a ruthless CEO who’s stealing her family’s land in Puerto Rico, while trying to get her relatives out alive. An extra member in her crew could be game-changing, but she’s wary of Dulce’s unpredictability and history of indiscretion. Still, Dulce’s hunger for justice draws Marisol in, along with her formidable Lower East Side Women’s Health Clinic’s heist squad. But their race-against-the-clock plan is soon complicated by a sexy, crusading journalist—not to mention the powerful men who turn deadly when ex-side chicks step out of the shadows and demand to call the shots . . .


Praise for Aya de León and her novels

Aya de León teaches creative writing in UC Berkeley’s African American Studies Department. Her award-winning Justice Hustlers series has received acclaim in the Washington Post, Jacobin Magazine, and The Establishment. Her work has also appeared in Ebony, Essence, Guernica, Plougshares, The Root, VICE, and on Def Poetry. She is an alumna of Cave Canem and VONA. Visit her online at ayadeleon.com, on Twitter at @AyadeLeon or on Facebook at ayadeleonwrites.
Loading...
or
Not Currently Available for Direct Purchase