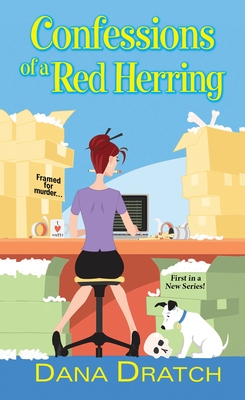 As a reporter, she’s used to covering the news.
Now she’s the headline.

Alex Vlodnachek has been a reporter for 12 years, a P.R. rep for three months, and a murder suspect for all of 24 hours. When her agency's double-dealing CEO is stabbed, scheming co-workers cast the new redhead as a compelling red herring. The story is media catnip—especially her salacious nickname: Vlod the Impaler.

Even Alex has to admit she looks guilty.

Out of a job and under suspicion, Alex is running low on cash, when she’s visited by a second disaster: her family. Soon her tiny bungalow is bursting with her nearest and not-so-dearest. To keep herself out of jail—and save what’s left of her sanity—Alex returns to her reporting roots. She goes undercover to reclaim her life, break the story, and unmask a murderer. Pretty much in that order.

What she doesn’t know: The killer also has a to-do list.
And Alex is on it.

Dana Dratch is a former newspaper reporter and current personal finance writer. When she's not finishing Seeing Red—the next Alex Vlodnachek mystery—you'll spot her byline on a host of top news sites. You can learn more about her mysteries at ConfessionsofaRedHerring.com.
Loading...
or
Not Currently Available for Direct Purchase