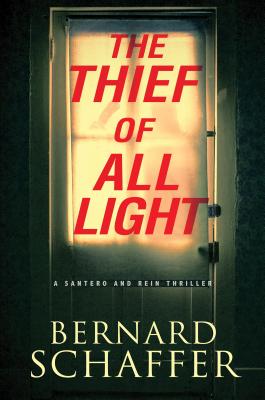 The Thief of All Light (A Santero and Rein Thriller #1)

“It was one thing to fantasize about evil, to reach into the darkness and play with it a little . . .”

Rookie cop Carrie Santero has always been fascinated by serial killers. As a teenager, she wrote a letter to Charles Manson in prison—and received a chilling reply. Then she came face to face with a child murderer in her small Pennsylvania town, an encounter that haunts her to this day. Now, as a detective in training, she finally has her chance to make a difference; to hunt down a psychopathic sadist who embodies the very nature of evil itself.

“. . . but it was something different when it knew your name.”

The killer draws inspiration from the most twisted minds in modern crime. Ted Bundy. John Wayne Gacy. Ed Gein. The Green River Killer. As the body count rises, Carrie and her boss, Chief Bill Waylon, realize they’re dealing with an unpredictable “omnikiller” who cannot be profiled. Their only hope is to enlist the help of Jacob Rein, a brilliant but tarnished former detective who has plumbed the darkest recesses of the soul. Who has seen the heart of darkness. And whose insights on evil could lead Carrie to the point of no return.

“Schaffer is the real deal. His writing will knock you out.”
—J.A. Konrath, author of the Jack Daniels Mysteries

“Bernard Schaffer is the real thing.  He writes about cops with the assurance of a seasoned police veteran, and his debut THE THIEF OF ALL LIGHT launches a stunning series with two of the most original heroes ever - as well as a killer who sets a new standard for lethal danger.”
—Lisa Scottoline, New York Times Bestselling author of Exposed

“From its first three lines, The Thief of All Light announces itself as a stylish, attention-getting thriller. Its speed and intensity are matched by the most engaging pair of detectives I’ve seen in a long while.”
—David Morrell

“Schaffer’s experience as a police officer lends verisimilitude to the attitudes and actions of his cast. . . .  The character of Jacob bodes well for the sequel.”
—Publishers Weekly

“Schaffer’s knowledge of detective work, particularly the toll it takes on those involved in a case, is evident. He dives deeply into the psyche of the officers, the inner angst, frustrations, and doubts; getting into the minds of the criminals they’re trying to catch, and dealing with the guilt and desperation that often results in the process. VERDICT: strong on the emotional struggles of the characters… appeal to fans of Brian Freeman, J.A. ­Kerley, and Meg Gardiner.”
—Library Journal

Bernard Schaffer is an author, full-time police detective, and father of two.  As a twenty-year law enforcement veteran, he is a decorated criminal investigator, narcotics expert, and child forensic interviewer. Schaffer is the author of numerous independently published books and series. He lives and works in the suburbs of Philadelphia, PA. Visit him @BernardSchaffer or www.bernardschaffer.com.
Loading...
or
Not Currently Available for Direct Purchase