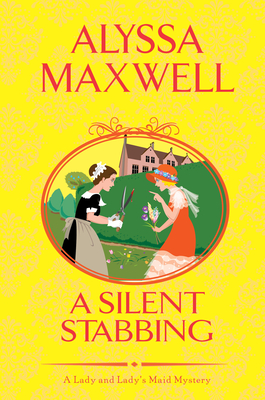 A Silent Stabbing (A Lady and Lady's Maid Mystery #5)

As England recovers from its costly involvement in the Great War, Lady Phoebe Renshaw and her lady’s maid, Eva Huntford, find the steady comforts of their lives unsettled by a local case of murder . . .

Eva is excited for a visit from her sister Alice, who lives in Suffolk with her husband and three children. But when Alice arrives alone, desiring a break from her family, Eva becomes concerned. Her dismay deepens as Alice starts spending time with a former beau, Keenan Ripley, who owns the nearby pear orchard. At the same time, Phoebe's sister Julia, now a widow and pregnant, is in a fretful state, and Phoebe struggles to be helpful to her.

When Keenan's brother Stephen, the new head gardener at the Renshaw estate, Foxwood Hall, is found impaled by a pair of hedge clippers, the police—including Eva's beau, Constable Miles Brannock—suspect his closest kin. Stephen had been eager to sell their orchard to an American developer, but Keenan had fiercely resisted. A table set with two teacups and scones suggests Keenan had company the morning of the murder—and Eva fears her sister was with him.

If Alice were to provide Keenan with an alibi, her reputation and marriage would be ruined. She denies being there but is clearly withholding secrets, much to Eva's consternation. Now, to protect her sister, Eva and Phoebe set off to expose the gardener's real killer, putting their own lives at risk . . .

Praise for Alyssa Maxwell and her Lady and Lady’s Maid Mysteries!

“The action unfolds smoothly until well-disguised clues lead to a clever and satisfying denouement. Downton Abbey fans will have fun.”
—Publishers Weekly

“A well-crafted historical mystery which will delight devotees of television shows such as Downton Abbey.”
—Suspense Magazine

“Well-crafted . . . Maxwell artfully portrays the personal dynamics of English society at the time, and readers will hope to see more of the endearing Phoebe and Eva.”
—Publishers Weekly

“An unusual twist rooted in the recent horrors of World War I adds interest to a country-house mystery.”
—Kirkus Reviews

A Pinch of Poison

“Along with a bracing mystery, Maxwell explores compelling themes. Although this is from a slightly earlier time period, it’s a good match with Rhys Bowen’s Her Royal Spyness series.”
—Booklist

“Entertaining . . . some of the characters and scenes are highly reminiscent of TV’s Downton Abbey, but Maxwell makes Phoebe and Eva distinctive personalities in their own right.”
—Publishers Weekly

“Downton Abbey fans will enjoy Maxwell’s evocative descriptions of a particular society as it transitions from the Edwardian Age to modern times.”
—Library Journal

Alyssa Maxwell knew from an early age that she wanted to be a novelist. Growing up in New England and traveling to Great Britain fueled a passion for history, while a love of puzzles of all kinds drew her to the mystery genre. She and her husband reside in Florida, where she loves to watch BBC productions, sip tea in the afternoons, and delve into the past. You can learn more about Alyssa and her books at www.alyssamaxwell.com.
Loading...
or
Not Currently Available for Direct Purchase