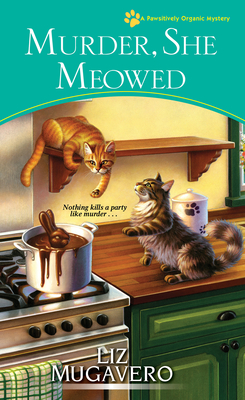 Kristan “Stan” Connor loves concocting tasty organic treats for dogs and cats—and she also loves her fiancé, pub owner Jake McGee. But she’s not so enthusiastic about finding a dead body at her own bachelorette party . . .

Stan and Jake’s wedding will soon take place on the town green in Frog Ledge, Connecticut, followed by a reception at their beloved Irish pub filled with friends, family, and their four favorite canine companions. Stan just has to endure the traditional girls’ night out first. Male strippers jumping out of gigantic cakes aren’t her preferred entertainment. But the hired hottie never gets around to taking it all off . . . because someone takes him out first with one of Stan’s kitchen knives. A heartbroken Stan recognizes the victim as one of the delivery men from the local farm—who must have been moonlighting for some extra cash. Now the guest list has turned into a suspect list—and Stan’s making a vow to find the killer . . .

Praise for Purring Around the Christmas Tree

Liz Mugavero is a corporate communications consultant and animal lover from the Boston area, whose canine and feline rescues demand the best organic food and treats around. She is the author of The Icing on the Corpse, Kneading to Die, Murder Most Finicky, and A Biscuit, A Casket; her short stories have been published in the UK and Australia; and her essays have appeared in national publications Skirt! and Sassee Magazine for Women.
Loading...
or support indie stores by buying on