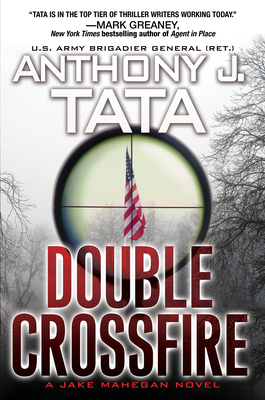 In the most shocking scenario of our time, former Brigadier General Anthony J. Tata takes you inside a brilliantly conceived, brutally executed plot to overthrow our government—from within . . .

“How do you overturn an election?” It’s a question that has obsessed presidential candidate Jamie Carter ever since her loss to businessman and political neophyte President Jack Smart. In spite of the election results, she’s determined to take what she sees as her rightful place in the White House—through any means possible. First, she establishes residency in North Carolina. Then, when the state’s Pro Tem of the US Senate is found dead, she is appointed to his position by her friend, the governor. Now, there are only three people who stand in her way: the Speaker of the House, the Vice President, and the President himself . . .

The countdown begins. The assassins are ready. But when one of them tries to kill the CIA Director under Jake Mahegan’s watch, the plan is momentarily disrupted. Jake is able to prevent one murder—but the conspiracy is too big, and too insidious, to stop now. Senator Jamie Carter is the mastermind behind one of the bloodiest coups ever conceived. Her highly trained killers are closing in on all the president’s men. And the course of American history will be changed forever—on Assassination Day . . .

Brigadier General Anthony J. Tata, U.S. Army (Retired), is the national bestselling author of Direct Fire, Reaper Ghost Target, Besieged (a Publishers Weekly Top 10 Best Mystery/Thriller of 2017), Three Minutes to Midnight, Foreign and Domestic, and the Threat series. During his active duty military career, he commanded combat units in the 82nd and 101st Airborne Divisions and the 10th Mountain Division. His last combat tour was in Afghanistan in 2007 where he earned the Combat Action Badge and the Bronze Star Medal. He is a frequent foreign policy guest commentator on Fox News, CNN, and One America News Network’s Tipping Point with Liz Wheeler. Previously, General Tata served as the Secretary of Transportation of North Carolina, Superintendent of Schools for Wake County Public School System, and Chief Operating Officer of Washington, DC, Public Schools.

Brigadier General Tata donates a portion of his earnings to the USO Metro DC, the North Carolina Heroes Fund, and the Michael Murphy Foundation.

“Jake Mahegan remains a strong series lead, and his fans will still want to follow his adventures.”
—Booklist

“Anthony J. Tata is in the top tier of thriller writers working today. His books are absolute rollercoaster rides and he brings a pace and scope to his novels that make them especially fun and fascinating reads.”
—Mark Greaney, #1 New York Times bestselling author of Agent in Place and Tom Clancy Full Force and Effect

“Horrific at times, spine-tingling throughout, Tata once again proves capable of writing a firestorm that’s even scarier because it is all too real.”
—Suspense Magazine

“Tata does a wonderful job balancing the action with the characters and generates a sense of claustrophobia that only adds to the tension. Fans of books set in the world of special ops will surely enjoy this one.”
—Booklist

More Praise for Anthony J. Tata and his electrifying thrillers

“Anthony Tata ups his game to a whole new level in Three Minutes to Midnight, which just might be the best pure, hardcore thriller of the year so far. It’s Brad Thor and the late, great Vince Flynn. . . . The perfect mix of style and substance that’s as ambitiously plotted as it is exquisitely realized.”
—Jon Land, The Providence Sunday Journal