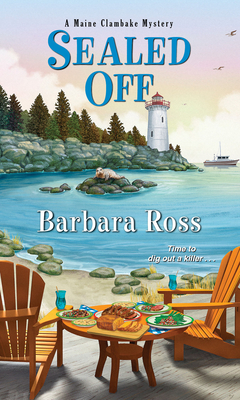 Sealed Off (A Maine Clambake Mystery #8)

Early October is “winding down” time in Busman’s Harbor, Maine, but there’s nothing relaxing about it for Julia Snowden. Between busloads of weekend leaf peepers at the Snowden Family Clambake and a gut renovation of the old mansion on Morrow Island, she’s keeping it all together with a potentially volatile skeleton crew—until one of them turns up dead under the firewood.

When the Russian demo team clearing out the mansion discovers a room that’s been sealed off for decades, Julia’s baffled as to its purpose and what secrets it might have held. Tensions are already simmering with the crew, but when one of the workers is found murdered, things come to a boil. With the discovery of another body—and a mysterious diary with Cyrillic text in the hidden room—the pressure’s on Julia to dig up a real killer fast. But she’ll have to sort through a pile of suspects, including ex-spouses, a spurned lover, and a recently released prisoner, to fish out one clammed-up killer.

“Sure to appeal to readers who treasure the Maine coast, Ross’s latest continues the lives and minor dramas of her fictionalized version of Boothbay Harbor with amiable characters.”
—Kirkus Reviews

Barbara Ross is the author of the Maine Clambake Mystery novels. Books in the series have been nominated for multiple Agatha Awards for Best Contemporary Novel and have won the Maine Literary Award for Crime Fiction. Barbara’s novellas featuring the Maine Clambake characters are included along with stories by Leslie Meier and Lee Hollis in the holiday anthologies Eggnog Murder, Yule Log Murder, and Haunted House Murder. Her second series, the Jane Darrowfield Mysteries, began with Jane Darrowfield, Professional Busybody. Barbara and her husband live in Portland, Maine. Readers can visit her website at www.maineclambakemysteries.com.
Loading...
or support indie stores by buying on