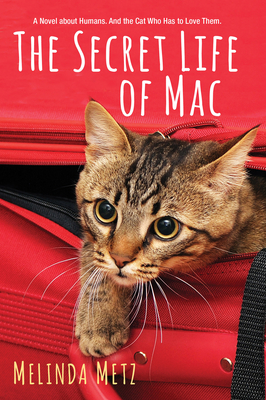 The Secret Life of Mac

Inspired by the true story of a kleptomaniac cat who stole his way into America’s heart . . .

HE’S THE CAT THIEF OF LOVE
MacGyver the tabby is feeling very pleased with himself. His human, Jamie Snyder, has found the perfect packmate—and it’s all thanks to Mac. By stealing personal items from the home of Jamie’s handsome neighbor David, the matchmaking cat brought these two L.A. singles together. Now, while the newlyweds are off on their honeymoon, MacGyver is ready for a well-deserved cat nap. That is, until he meets his cat sitter Briony. Like most humans, she’s hopeless when it comes to romance. And Mac can’t resist a challenge . . .

SHE’S FOUND THE  ESCAPE CLAWS
Briony feels terrible about leaving her fiancé at the altar. When her cousin Jamie offers her the chance to cat sit MacGyver, the runaway bride leaps at the chance to cuddle up with the only male creature she trusts herself around. But MacGyver has other plans. He lures Briony to a friendly neighborhood retirement community—run by a charming young hottie named Nate. Briony and Nate hit it off instantly. But Briony’s still not sure she’s ready for a relationship. And Nate’s got problems of his own—someone is sabotaging his community.

Crazy humans. Why can’t they follow their instincts and go after the love they deserve? MacGyver is on the case. And this time, he’s not pussyfooting around . . .

RAVES FOR TALK TO THE PAW

“Surpassingly cute story of a matchmaking cat determined to pair off his human with a neighbor through the power of stinky laundry.”
—Kirkus Reviews

“Whimsical . . . fans of cozy romances will root for these . . . appealing characters.”
—Publishers Weekly

Praise For The Secret Life of Mac…

Melinda Metz is the author of the Roswell High series, basis of the hit televison show Roswell. She is an Edgar Award nominee for the Wright and Wong mystery series, written with Laura J. Burns. Melinda lives in North Carolina with her dog Scully, who exhibits some cat-like behaviors—such as seldom coming when she’s called.
Loading...
or support indie stores by buying on