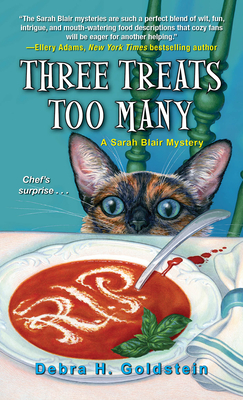 Three Treats Too Many (A Sarah Blair Mystery #3)

When a romantic rival opens a competing restaurant in small-town Wheaton, Alabama, Sarah Blair discovers murder is the specialty of the house . . .

For someone whose greatest culinary skill is ordering takeout, Sarah never expected to be co-owner of a restaurant. Even her Siamese cat, RahRah, seems to be looking at her differently. But while Sarah and her twin sister, Chef Emily, are tangled up in red tape waiting for the building inspector to get around to them, an attention-stealing new establishment—run by none other than Sarah's late ex-husband's mistress, Jane—is having its grand opening across the street.

Jane's new sous chef, Riley Miller, is the talk of Wheaton with her delicious vegan specialties. When Riley is found dead outside the restaurant with Sarah's friend, Jacob, kneeling over her, the former line cook—whose infatuation with Riley was no secret—becomes the prime suspect. Now Sarah must turn up the heat on the real culprit, who has no reservations about committing cold-blooded murder . . .

Praise For Three Treats Too Many (A Sarah Blair Mystery #3)…

Praise for One Taste Too Many

Judge Debra H. Goldstein writes Kensington’s Sarah Blair mystery series. She is also the author of Should Have Played Poker and IPPY Award winning Maze in Blue. Her short stories, including Anthony and Agatha nominated “The Night They Burned Ms. Dixie’s Place,” have appeared in numerous periodicals and anthologies. An active Birmingham, Alabama, civic volunteer, Debra also serves on the national boards of Sisters in Crime and Mystery Writers of America, and is president of SEMWA and past president of SinC’s Guppy Chapter.
Loading...
or support indie stores by buying on