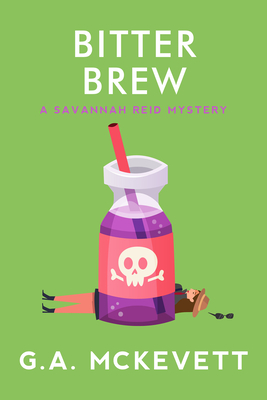 When good intentions pull her into a toxic murder case, P.I. Savannah Reid’s days as San Carmelita’s most full-figured detective might be running out . . .

Savannah is shaken to the core when coroner Dr. Jennifer Liu appears on her doorstep late one night and admits to fudging an autopsy report to keep her friend Brianne’s suicide a secret—fulfilling a final promise made before the terminally ill woman administered a lethal drug cocktail. But after Dr. Liu finds the same unique mixture in a second body, she fears the deaths share a dark connection . . .

Apprehensive about concealing a felony, Savannah and the Moonlight Magnolia Detective Agency launch a discreet investigation into Brianne’s rare condition and the deadly concoction linking the two bodies. As chilling evidence points to an undeniable case of double murder, Savannah only hopes that, like Dr. Liu, her desire to help a friend won’t put her reputation at risk—or, worse, land her on the next slab . . .

G.A. McKevett is the pseudonym of a well-known author, Sonja Massie. She is currently working on the next Savannah Reid mystery. Readers can visit her website at www.sonjamassie.com.