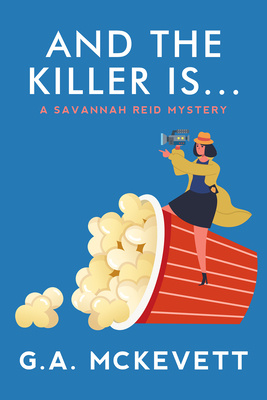 When a 90-year-old, former movie star is murdered inside her derelict 1920s mansion, plus-sized PI Savannah Reid, Dirk, and the Moonlight Magnolia gang search for her killer by exploring the "good old days" of Hollywood-when both she and Tinsel Town were young, but far from innocent.

It will be a cold day in San Carmelita before Savannah skips over a high-profile homicide case, especially one attached to a tasty reward. But when 90-year-old former silver screen siren Lucinda Faraday is murdered inside her derelict mansion, serving justice comes with unsavory risks. The fallen star, considered one of the most beautiful women of her time, was found strangled by a pair of vintage stockings amid a hoard of garbage and priceless memorabilia. Now, Lucinda is making headlines again--and like in the past, her name is connected with the worst kind of scandal...

As a quest for answers reveals sleazy secrets about the victim's history, the Moonlight Magnolia Agency soon discover that corruption, addiction, and blackmail were as rampant in the good old days of Hollywood as in the present--maybe even more so. Balancing a suspect list longer than Lucinda's acting credits and evidence that could destroy the reputation of people still alive, can Savannah outsmart the culprit before she or someone else get reduced to tabloid fodder next?

G.A. McKevett is the author of the acclaimed Savannah Reid mystery series, as well as the Granny Reid mysteries. Also writing under the name Sonja Massie, she has authored over sixty books ranging from cozy mysteries, to historical romances, to nonfiction works on the history of Ireland. Her earthy humor and fast-paced plots delight her fans, while critics applaud her offbeat characterizations and incisive observations on human nature. Irish by ancestry, she has lived in Toronto, Ireland, and Los Angeles, but now resides in New York. Readers can visit her online at SonjaMassie.com.
or support indie stores by buying on
Copyright © 2020 American Booksellers Association