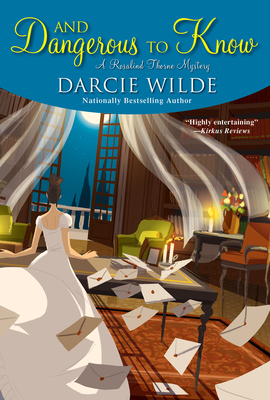 Darcie Wilde brings her nationally bestselling Rosalind Thorne Mysteries to Kensington for a third installment in the Jane Austen-inspired Regency-era series--now in paperback. Entrusted with recovering a packet of highly sensitive letters stolen from Lady Melbourne's desk, the charming and resourceful "useful woman," Rosalind Thorne, is about to find herself enmeshed in the trials and tangles surrounding that most notorious poet of the Regency--George Gordon, Lord Byron, and the most famous of his mistresses, the utterly ungovernable Lady Caroline Lamb.

When the ladies of the ton of Regency London need discreet assistance, they turn to Rosalind Thorne--in these mysteries inspired by the novels of Jane Austen...

However, Lady Melbourne omits a crucial detail. Rosalind learns from the Bow Street runner Adam Harkness that an unidentified woman was found dead in the courtyard of Melbourne House. The coroner has determined that she was poisoned. Adam urges Rosalind to use her new position in the household to help solve the murder. As she begins to untangle a web of secrets and blackmail, Rosalind finds she must risk her own life to bring this desperate business to an end...

“Rosalind carries the soul of Sherlock Holmes in the world of Elizabeth Bennet, and it’s a hard combination to beat.”
—BookPage on And Dangerous to Know

“Captivating...Wilde smoothly mixes historical figures and events into a plot that’s sure to keep readers turning the
pages to see what happens next. Regency fans will be charmed.”
—Publishers Weekly on And Dangerous to Know

“The Regency frame is skillfully woven through a story that features surprising plot twists and an engaging subplot concerning Rosalind’s dilemma over whom to marry—Harkness or a duke who will allow her to reclaim her past.”
—Booklist on And Dangerous to Know

“The third installment in Darcie Wilde's ‘impressive’ and nationally bestselling historical mystery series set in Regency London.  The series features the charming, resourceful Rosalind Thorne, a woman privy to the secrets and scandals of high society.”
—Publishers Weekly on A Useful Woman

“The Rosalind Thorne mysteries are loosely inspired by Jane Austen's novels, and Wilde has done a masterful job of recreating the tone and language of Austen's England…Rosalind is a spirited, sympathetic heroine; while her position as a “useful lady” brings her into the orbit of criminality, she remains very much a product of her time, ever heedful of her reputation and standing in society. Wilde has given her just enough modern sensibilities to make her relatable but never oversteps in a way that divorces from the realities of the time…Here is a mystery with a nice balance between the salacious and the sad, the gratifying and the tragic.”
—Criminal Element on A Purely Private Matter

“With plenty of twists and turns, and romance thrown in to boot, A Useful Woman by Darcie Wilde is a delight to read, and I look forward to the next in the series.”
—Fresh Fiction

“Rosalind is an interesting, dare I say “plucky” heroine, a once-rich girl now lowered to live by her wits. She still follows the strict etiquette of her time and lost position, no matter the cost. The asides on what is proper in each situation are amusing, reminiscent of Jane Austen…I thoroughly enjoyed this novel and look forward to the next book in the series.”
—The Historical Novels Reviewon A Useful Woman

“Entertaining…Rosalind’s investigation highlights the difficulties created by Regency-era social mores and how women in particular were hobbled by these conventions. Some light romantic diversion reveals aspects of Rosalind’s personal history that help round out her character.”
—Publishers Weekly on A Purely Private Matter

Darcie Wilde is the author of the Rosalind Thorne Mysteries, a Regency-set historical mystery series inspired by the novels of Jane Austen, as well as the Regency Makeover Trilogy of eNovellas. Her book Lord of the Rakes was a RT Book Reviews nominee for Best First Historical Romance. Visit her online at DarcieWildeRomance.com.
Loading...
or support indie stores by buying on