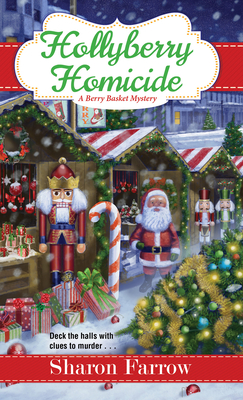 A cold wind is blowing off Lake Michigan, and murder is scaring the dickens out of everyone . . .

Considering her name, Marlee Jacob is an obvious choice for the role of Jacob Marley in Oriole Point’s production of A Christmas Carol. It’s just sad that the role has opened up because of the death of the elderly actor who’d originally been cast.

But Marlee, the proprietor of The Berry Basket, will do her best to keep spirits high—that is, until clues start mounting that there’s danger behind the scenes. There are accidents on set, the tree in the village square topples over, and worst of all, a body is found with a sprig of holly draped over it. If Marlee can’t wrap up the case, she may not have a berry merry Christmas . . .

Sharon Farrow is also the co-author of the Agatha nominated Eliza Doolittle and Henry Higgins Mysteries written under the joint pseudonym D.E. Ireland. A freelance writer since her twenties, she has been published in mystery, fantasy, and romance; one of her short stories has been optioned for film. Sharon currently lives along the beautiful Lake Michigan shoreline where the Berry Basket series is set. Visit her online at sharonfarrowauthor.com, on Facebook @SharonFarrowAuthor, or Twitter @SharonFarrowBB.
Loading...
or support indie stores by buying on