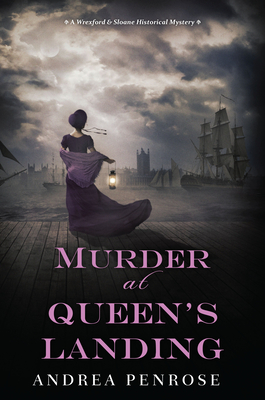 A bright new star in British Mystery that fans of Jacqueline Winspear, Rhys Bowen, and Amanda Quick will love, Andrea Penrose transports readers to Regency England with the story of Lady Charlotte Sloane and the Earl of Wrexford who must untangle a dangerous web of secrets and lies that will call into question how much they really know about the people they hold dear—and about each other…

When Lady Cordelia, a brilliant mathematician, and her brother, Lord Woodbridge, disappear from London, rumors swirl concerning fraudulent bank loans and a secret consortium engaged in an illicit—and highly profitable—trading scheme that threatens the entire British economy. The incriminating evidence mounts, but for Charlotte and Wrexford, it’s a question of loyalty and friendship. And so they begin a new investigation to clear the siblings’ names, uncover their whereabouts, and unravel the truth behind the whispers.

As they delve into the murky world of banking and international arbitrage, Charlotte and Wrexford also struggle to navigate their increasingly complex feelings for each other. But the clock is ticking—a cunning mastermind has emerged . . . along with some unexpected allies—and Charlotte and Wrexford must race to prevent disasters both economic and personal as they are forced into a dangerous match of wits in an attempt to beat the enemy at his own game.

Praise for MURDER AT QUEEN'S LANDING

Praise for MURDER AT HALF MOON GATE

“Penrose deftly combines a Regency romance with a tricky mystery that delves into social unrest and the darker side of this storied period.”
—Kirkus Reviews

“Its complex story line and authentic historical details bring the early days of the Industrial Revolution vividly to life. Bound to fascinate readers of C.S. Harris and even fans of Victorian mysteries.”
—Library Journal, Starred Review

“Fans of C.S. Harris take note! In this new, Regency-set mystery series, the artist Charlotte Sloane and the scientist Earl of Wrexford are the perfect mismatched pair of sleuths. A riveting ride through Regency London, from the slums of St. Giles, to the mansions of Mayfair.”
—Lauren Willig, New York Times bestselling author

“A wonderfully engaging Regency mystery, with a most determined heroine and an engaging pair of street urchins at her side. Historical chemistry meets alchemy, and only a nonchalant nobleman can help solve the murder. A delight of a book.”
—Joanna Bourne, award-winning author

Andrea Penrose is the bestselling author of Regency-era historical fiction, including the acclaimed Wrexford & Sloane mystery series, as well as Regency romances written under the names Cara Elliott and Andrea Pickens. Published internationally in ten languages, she is a three-time RITA Award finalist and the recipient of numerous writing awards, including two Daphne Du Maurier Awards for Historical Mystery and two Gold Leaf Awards. A graduate of Yale University with a B.A. in Art and an M.F.A. in Graphic Design, Andrea fell in love with Regency England after reading Pride and Prejudice and has maintained a fascination with the era’s swirling silks and radical new ideas throughout her writing career. She lives in Connecticut and blogs with a community of historical fiction authors at WordWenches.com. She also can be found at AndreaPenrose.com and on Instagram @AndreaPenroseBooks.
or support indie stores by buying on