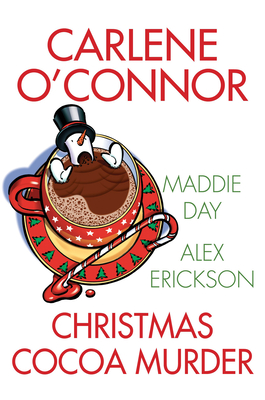 'Tis the season for hot chocolate and mouthwatering treats. But sometimes too much of a good thing can be downright deadly . . .

CHRISTMAS COCOA MURDER by CARLENE O’CONNOR
Siobhán O’Sullivan’s hopes for a quiet Irish Christmas are dashed when the local Santa turns up dead in a carnival dunk tank of hot cocoa. Now instead of hunting down holiday gifts, she’s pursuing a heartless killer. Seems the dead Santa was no angel either, stealing neighborhood dogs to guide his sleigh. But was it his holiday antics—or worse—that led to his death by chocolate?

CHRISTMAS COCOA AND A CORPSE by MADDIE DAY
When local businessman Jed Greenberg is found dead with a Chocolate lab whimpering over his body, the police start sniffing around Robbie Jordan’s country restaurant for answers. Was it something in Robbie’s hot cocoa that killed Jed, or was it Cocoa the dog? As the suspects pile as high as her holiday tree, Robbie attempts to get to the bottom of the sickly-sweet murder . . .

DEATH BY HOT COCOA by Alex Erickson
A Christmas-themed escape game seems like the perfect pre-holiday treat for bookstore café owner Krissy Hancock and her best friend. But when the host is found dead in a pool of hot cocoa, it’s up to Krissy and her team to catch the killer—or escape before getting killed.

There’s nothing like a hot cup of murder to warm up the holiday season!

Carlene O’Connor comes from a long line of Irish storytellers. Her great-grandmother emigrated from Ireland filled with tales and the stories have been flowing ever since. Of all the places across the pond she’s wandered, she fell most in love with a walled town in County Limerick and was inspired to create the town of Kilbane, County Cork. Carlene currently divides her time between New York and the Emerald Isle. She is currently at work on the next book in the Irish Village Mystery series.

Agatha- and Macavity-nominated author Maddie Day is a talented amateur chef who knows both Indiana and Cape Cod intimately. She is a member of Sisters in Crime and Mystery Writers of America and blogs with the Wicked Authors and at Killer Characters. Day lives with her beau and two elderly cats north of Boston, where she gardens, cooks, and devises new murderous plots. She hopes you’ll find her at maddiedayauthor.com.

Alex Erickson has always wanted to write, even at a young, impressionable age. He’s always had an interest in the motive behind murder, which has led him down his current path. He’s always ready with a witty—at least in his opinion—quip, and tries to keep every conversation light and friendly. Alex lives in Ohio with his family and resident felines, who provide endless amounts of inspiration. You can visit him on Twitter at twitter.com/AEricksonbooks and on Facebook at: www.facebook.com/alexericksonbooks.

“Captivating . . . Fans of light mysteries with an Irish flavor will look forward to Siobhán and Macdara’s further adventures.”
—Publishers Weekly on Murder in an Irish Church Yard

“This entertaining combination of Maeve Binchy's old-world Irish charm and Janet Evanovich's roguish humor is a smart, fast-paced read. Devotees of the Hibernian mysteries of Dicey Deere and M.C. Beaton will toast this debut with a pint of Guinness. Sláinte!”
—Library Journal on Murder in an Irish Village

“It’s yummy fun, but don’t read it when you’re hungry. Unless you’re hungry for a good book, and not breakfast!”
—Suspense Magazine on Flipped for Murder