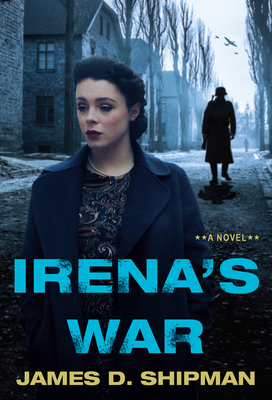 Based on the gripping true story of an unlikely Polish resistance fighter who helped save thousands of Jewish children from the Warsaw ghetto during World War II, bestselling author James D. Shipman's Irena's War is a heart-pounding novel of courage in action, helmed by an extraordinary and unforgettable protagonist.

September 1939: The conquering Nazis swarm through Warsaw as social worker Irena Sendler watches in dread from her apartment window. Already, the city's poor go hungry. Irena wonders how she will continue to deliver food and supplies to those who need it most, including the forbidden Jews. The answer comes unexpectedly.

Dragged from her home in the night, Irena is brought before a Gestapo agent, Klaus Rein, who offers her a position running the city's soup kitchens, all to maintain the illusion of order. Though loath to be working under the Germans, Irena learns there are ways to defy her new employer--including forging documents so that Jewish families receive food intended for Aryans. As Irena grows bolder, her interactions with Klaus become more fraught and perilous.

Klaus is unable to prove his suspicions against Irena--yet. But once Warsaw's half-million Jews are confined to the ghetto, awaiting slow starvation or the death camps, Irena realizes that providing food is no longer enough. Recruited by the underground Polish resistance organization Zegota, she carries out an audacious scheme to rescue Jewish children. One by one, they are smuggled out in baskets and garbage carts, or led through dank sewers to safety--every success raising Klaus's ire. Determined to quell the uprising, he draws Irena into a cat-and-mouse game that will test her in every way--and where the slightest misstep could mean not just her own death, but the slaughter of those innocents she is so desperate to save.

"From the first crackling sentence to the vividly rendered climax, Task Force Baum provides the reader with a tempo that never flags. Based on a controversial raid in WWII to liberate a POW camp behind Nazi lines, this novel is revealing, and at the same time, great reading entertainment."
—James R. Benn, author of When Hell Struck Twelve on Task Force Baum

“A guts‑and‑glory novel of WWII, based on a true story, told with all the fire and fury of the
war. . . . A striking testament to the glory of the ‘Greatest Generation.”
—The Traitor on Task Force Baum

“A Bitter Rain is the best kind of WWII novel, action-packed, populated by complex characters facing deep moral dilemmas, and historically accurate. I loved it.”
—Mark Sullivan, author of #1 Amazon Charts bestseller Beneath a Scarlet Sky on A Bitter Rain

“Harrowing, intense, and oh so real, this story plunges the reader into the nightmare world of Nazi Germany where good and decent people struggle to survive.”
—Rhys Bowen, New York Times bestselling author of The Royal Spyness Series and In Farleigh Field on A Bitter Rain

"The characters in the story are so real, so believable, I could not help but become totally engrossed."
—Historical Novel Review on Going Home

James D. Shipman is the bestselling author of six historical novels, Irena's War, Task Force Baum, Constantinopolis, Going Home, It Is Well, and A Bitter Rain. He was born and raised in the Pacific Northwest and began publishing short stories and poems while earning a degree in history from the University of Washington and a law degree from Gonzaga University. He opened his own law firm in 2004 and remains a practicing attorney. An avid reader, especially of historical nonfiction, Shipman also enjoys traveling and spending time with his family. Visit him at James Shipman.com.
Loading...
or support indie stores by buying on