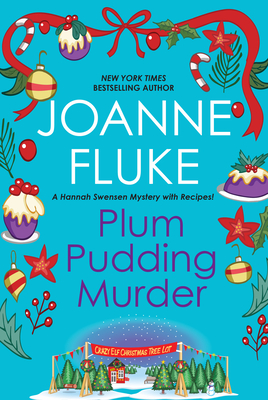 The Cookie Jar's busiest time of the year also happens to be the most wonderful time … for Christmas cookies, Hannah's own special plum pudding—and romance! She also gets a kick out of “Lunatic Larry Jaeger’s Crazy Elf Christmas Tree Lot,” a kitschy carnival taking place smack-dab in the middle of the village green. But then Hannah discovers the man himself dead as a doornail in his own office …

Now, with so many suspects to investigate and the twelve days of Christmas ticking away, Hannah's running out of time to nab a murderous Scrooge who doesn't want her to see the New Year …

JOANNE FLUKE is the New York Times bestselling author of the Hannah Swensen mysteries, which include Double Fudge Brownie Murder, Blackberry Pie Murder, Cinnamon Roll Murder, and the book that started it all, Chocolate Chip Cookie Murder. That first installment in the series premiered as Murder, She Baked:  A Chocolate Chip Cookie Mystery on the Hallmark Movies & Mysteries Channel. Like Hannah Swensen, Joanne Fluke was born and raised in a small town in rural Minnesota, but now lives in Southern California. Please visit her online at www.JoanneFluke.com.
or support indie stores by buying on