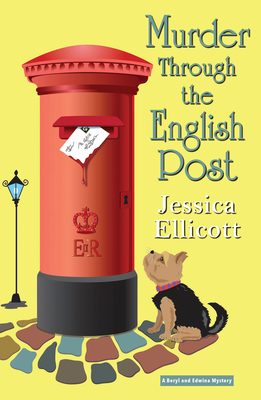 Murder Through the English Post (A Beryl and Edwina Mystery #6)

When a rash of poisoned pen letters envelops their sleepy English village, Beryl and Edwina, the delightfully mismatched friends and sleuths-of-a-certain-age, step up to stamp out the evil-minded epistles in Jessica Ellicott’s sixth historical mystery set in the wake of WWI.

What began for two dear if very different friends—an American adventuress and a prim and proper Brit—as a creative response to the lean times following the Great War has evolved into a respectable private enquiry business. So much so that Constable Gibbs calls upon Beryl and Edwina to solve a curious campaign of character assassination.

A series of anonymous accusations sent via post have set friend against friend and neighbor against neighbor. In her new position as magistrate, Edwina has already had to settle one dispute that led to fisticuffs. Even Beryl has received a poison pen letter, and while she finds its message preposterous and laughable, others are taking the missives to heart. Their headstrong housekeeper Beddoes is ready to resign and one villager has attempted to take her own life.

The disruption of the peace goes far beyond malicious mischief when another villager is murdered. Now it’s up to the intrepid sleuths to read between the lines and narrow down the suspects to identify the lethal letter writer and ensure that justice is delivered . . .

Jessica Ellicott is the author of the Beryl & Edwina Mystery series, as well as the Change of Fortune mysteries under the name Jessica Estevao and the bestselling Sugar Grove Mysteries as Daphne du Maurier Award-winning author Jessie Crockett. A member of Wicked Authors, Sisters in Crime, and ITW, she lives in northern New England where she obsessively knits wool socks and enthusiastically speaks Portuguese with a shocking disregard for the rules of grammar. Please visit her online at JessicaEllicott.com.