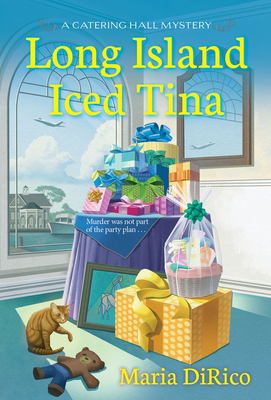 In the second installment of Maria DiRico's new Catering Hall Mystery series, Mia Carina is back in the borough of Queens, in charge of the family catering hall Belle View Banquet Manor, and keeping her nonna company. But some events--like murder at a shower--are not the kind you can schedule...

Mia's newly pregnant friend Nicole plans to hold a shower at Belle View--but Nicole also has to attend one that her competitive (and mysteriously rich) stepmother, Tina, is throwing at the fanciest place in Queens. It's a good chance for Mia to snoop on a competitor, especially since doing a search for "how to run a catering hall" can get you only so far.

Mia tags along at the lavish party, but the ambience suffers at Nicole's Belle View shower when a fight breaks out--and then, oddly, a long-missing and valuable stolen painting is unwrapped by the mom-to-be. Tina is clearly shocked to see it. But not as shocked as Mia is when, soon afterward, she spots the lifeless body of a party guest floating in the marina . . .

Maria DiRico is the pseudonym for Ellen Byron, author of the award winning, USA Today bestselling Cajun Country Mysteries. Born in Queens, New York, she is first-generation Italian-American on her mother's side and the granddaughter of a low-level Jewish mobster on her father's side. She grew up visiting the Astoria Manor and Grand Bay Marina catering halls, which were run by her Italian mother's family in Queens and have become the inspiration for her Catering Hall Mystery Series. DiRico has been a writer-producer for hit television series like Wings and Just Shoot Me, and her first play, Graceland, appears in the Best Short Plays collection. She's a freelance journalist, with over 200 articles published in national magazines, and previously worked as a cater-waiter for Martha Stewart, a credit she never tires of sharing. A native New Yorker who attended Tulane University, Ellen lives in Los Angeles with her husband, daughter, and two rescue dogs. She can be found online at EllenByron.com and ChicksOnTheCase.com.
Loading...
or support indie stores by buying on