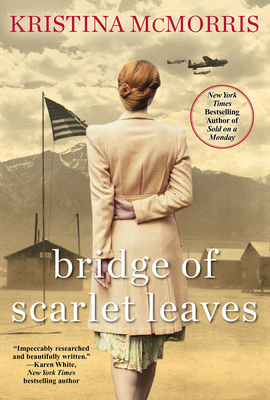 In this poignant and evocative novel by acclaimed author Kristina McMorris, a country is plunged into conflict and suspicion--forcing a young woman to find her place in a volatile world.

Los Angeles, 1941. Violinist Maddie Kern's life seemed destined to unfold with the predictable elegance of a Bach concerto. Then she fell in love with Lane Moritomo. Her brother's best friend, Lane is the handsome, ambitious son of Japanese immigrants. Maddie was prepared for disapproval from their families, but when Pearl Harbor is bombed the day after she and Lane elope, the full force of their decision becomes apparent. In the eyes of a fearful nation, Lane is no longer just an outsider, but an enemy.

When her husband is interned at a war relocation camp, Maddie follows, sacrificing her Juilliard ambitions. Behind barbed wire, tension simmers and the line between patriot and traitor blurs. As Maddie strives for the hard-won acceptance of her new family, Lane risks everything to prove his allegiance to America, at tremendous cost.

Skillfully capturing one of the most controversial episodes in recent American history, Kristina McMorris draws readers into a novel filled with triumphs and heartbreaking loss—an authentic, moving testament to love, forgiveness, and the enduring music of the human spirit.

Praise For Bridge of Scarlet Leaves…

"McMorris's second novel...gracefully blossoms through swift prose and rich characters. This gripping story about two "brothers" in arms and a young woman caught in between them hits all the right chords." —Publishers Weekly

"[McMorris] creates a believable world...all while perfectly capturing the flavor of the period. A sweeping yet intimate novel that will please both romantics and lovers of American history."
—Kirkus Reviews

"Rich in historical detail, peopled with well-developed characters, and spiced with tension and drama, Bridge of Scarlet Leaves is a novel to savor, and then to share with a friend." —Historical Novels Review

Praise for Kristina McMorris's other novels

"Richly woven and absorbing tale... compelling tale of survival and second chances, and of one immigrant's fantastic journey in the first decades of the 20th century." —The Boston Globe on The Edge of Lost

"The reader traipses through the early 1900s from Dublin bars to 19th-century Brooklyn, N.Y. We meet historical figures in passing like the vaudeville performer George M. Cohan and Al Capone along the way...Themes of shifting identity and assimilation run through the book." —The Portland Tribune on The Edge of Lost

"Kristina McMorris evokes such a strong sense of place that to open her books feels less like reading and more like traveling. Her absorbing new novel..[is an] epic, deeply felt tale of struggle and second chances... a transporting piece of historical fiction." —BookPage on The Edge of Lost

"McMorris's attention to historical detail captures the poignancy of old letters or treasured relics that have borne witness to ancestral emotions." —The Bellingham Herald on The Pieces We Keep

Kristina McMorris is a New York Times bestselling author and recipient of more than twenty national literary awards. She lives in the Pacific Northwest with her husband and two sons. She is the author the widely praised novels The Edge of Lost, The Pieces We Keep, Letters from Home and Bridge of Scarlet Leaves. For more, visit KristinaMcmorris.com.
Loading...
or support indie stores by buying on