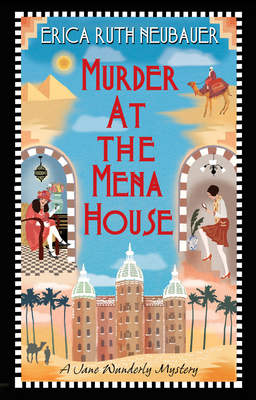 Murder at the Mena House (A Jane Wunderly Mystery #1)

Well-heeled travelers from around the world flock to the Mena House Hotel—an exotic gem in the heart of Cairo where cocktails flow, adventure dispels the aftershocks of World War I, and deadly dangers wait in the shadows . . .

Egypt, 1926.Fiercely independent American Jane Wunderly has made up her mind: she won’t be swept off her feet on a trip abroad. Despite her Aunt Millie’s best efforts, the young widow would rather gaze at the Great Pyramids of Giza than into the eyes of a dashing stranger. Yet Jane’s plans to remain cool and indifferent become ancient history in the company of Mr. Redvers, a roguish banker she can’t quite figure out . . .

While the Mena House has its share of charming guests, Anna Stainton isn’t one of them. The beautiful socialite makes it clear that she won’t share the spotlight with anyone—especially Jane. But Jane soon becomes the center of attention when she’s the one standing over her unintentional rival’s dead body. Now, with her innocence at stake in a foreign country, Jane must excavate an elusive killer before her future falls to ruin in Cairo, and the body count rises like the desert heat . . .

Advance Praise for Murder at the Mena House

With deft characterizations, an engaging plot, and the most compelling heroine I’ve found since Amelia Peabody, Erica Ruth Neubauer’s Murder at Mena House is the best book you’ll read this year. I can’t wait for the next installment of this phenomenal series.”
—Tasha Alexander, author of In the Shadow of Vesuvius

“What a refreshing surprise to be back on the Nile in this confident and accomplished debut. Neubauer pays proper homage to the Golden Age, but her crisp style and witty heroine ensure that Murder at the Mena House zips along in a thoroughly modern manner. I hope plucky Jane Wunderly has a long sleuthing future ahead; I, for one, am already looking forward to her next adventure.”
—Catriona McPherson, author of Go To My Grave

“It’s no small feat to bring 1920s colonial Egypt to life, but Murder at the Mena House does far more than that. It’s an elegant mystery—written with wit, style, and heart—and Jane Wunderly is an unforgettable sleuth. Erica Neubauer’s debut is an absolute delight.”
—Hilary Davidson, Anthony Award–winning author of Don’t Look Down

“Murder at the Mena House is impossible to put down. A pitch-perfect mystery, with an exotic locale, and an unforgettable main character I hope to encounter again in future books. Erica Neubauer has created one of the most impressive debut novels I’ve read.”
—Alex Grecian, author of The Saint of Wolves and Butchers

Erica Ruth Neubauer spent eleven years in the military, nearly two as a Maryland police officer, and one as a high school English teacher, before finding her way as a writer. She has been a reviewer of mysteries and crime fiction for publications such as Publishers Weekly and Mystery Scene Magazine for several years, and she’s a member of Sisters in Crime and Mystery Writers of America. Erica Ruth lives in Milwaukee, WI.
Loading...
or support indie stores by buying on