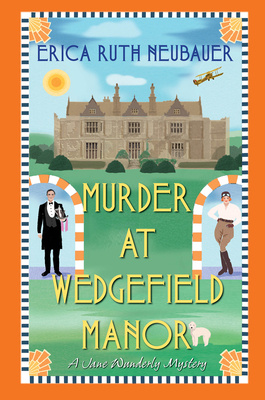 England, 1926: Wedgefield Manor, deep in the tranquil Essex countryside, provides a welcome rest stop for Jane and her matchmaking Aunt Millie before their return to America. While Millie spends time with her long-lost daughter, Lillian, and their host, Lord Hughes, Jane fills the hours devouring mystery novels and taking flying lessons—much to Millie’s disapproval. But any danger in the air is eclipsed by tragedy on the ground when one of the estate’s mechanics, Air Force veteran Simon Marshall, is killed in a motorcar collision.

The sliced brake cables prove this was no accident, yet was the intended victim someone other than Simon? The house is full of suspects—visiting relations, secretive servants, strangers prowling the grounds at night—and also full of targets. The enigmatic Mr. Redvers, who helped Jane solve a murder in Egypt, arrives on the scene to once more offer his assistance. It seems that everyone at Wedgefield wants Jane to help protect the Hughes family. But while she searches for answers, is she overlooking a killer hiding in plain sight?

“The country house intrigue and an unconventional chase reap rewards. Readers will look forward to further cases of the intrepid Jane and the mysterious Mr. Redvers.” —Publishers Weekly

Praise for Murder at Wedgefield Manor

“The country house intrigue and an unconventional chase reap rewards. Readers will look forward to further cases of the intrepid Jane and the mysterious Mr. Redvers.”
—Publishers Weekly

Praise for Murder at the Mena House

“Jane is a feisty heroine, the setting is enticingly depicted, and there are several intriguing subplots. Fans of Agatha Christie will enjoy this homage.”
—Booklist

“Neubauer’s promising debut…[Readers] will be eager for the next installment.”
—Publishers Weekly

“A welcome vacation…Erica Ruth Neubauer could whisk you off to a swanky Egyptian resort in the 1920s with plenty of cocktails and a mysterious handsome stranger.”
—Milwaukee Journal Sentinel

“Fans of Elizabeth Peter are going to want to get in on the ground floor of Erica Ruth Neubauer’s Jane Wunderly mysteries.”
—Jess Lourey in CrimeReads

“Murder at the Mena House reflects a much more glamorous and gentler age of sleuthing, when the detective wore a tuxedo instead of a trench coat and his lovely companion didn’t merely sit around and wait to be rescued from the villain’s clutches.”
—New York Journal of Books

“If this all sounds a bit like a lost novel from Elizabeth Peters, you are not mistaken. Erica Ruth Neubauer is clearly a fan of that grandmaster of our genre and this homage to her classic series will delight fellow fans of Amelia Peabody…Based on the strengths of this debut, Erica Ruth Neubauer proves herself a born storyteller.”
—BOLO Books

“This delightful new historical mystery series highlights a charming heroine, albeit one with secrets up her sleeve, and features colorful characters, a picturesque setting, sparkling wit, and a healthy dose of suspense.”
—Daniel Goldin, Boswell Books Company (Milwaukee, WI)

“This charming debut is perfect for fans of Tasha Alexander and Deanna Raybourn. I can't wait to see what Jane's next adventure will be!”
—John McDougall, Murder by the Book Bookstore (Houston, TX)

“If you want to escape to a glamorous hotel in 1920s Egypt and solve a good, old-fashioned murder with a witty heroine, this is the book for you!”
—Devin Abraham, Once Upon a Crime Books (Minneapolis, MN)

"With deft characterizations, an engaging plot, and the most compelling heroine I’ve found since Amelia Peabody, Erica Ruth Neubauer’s Murder at the Mena House is the best book you’ll read this year. I can’t wait for the next installment of this phenomenal series.”
—Tasha Alexander, author of In the Shadow of Vesuvius

“What a refreshing surprise to be back on the Nile in this confident and accomplished debut. Neubauer pays proper homage to the Golden Age, but her crisp style and witty heroine ensure that Murder at the Mena House zips along in a thoroughly modern manner. I hope plucky Jane Wunderly has a long sleuthing future ahead; I, for one, am already looking forward to her next adventure.”
—Catriona McPherson, author of Go To My Grave

“It’s no small feat to bring 1920s colonial Egypt to life, but Murder at the Mena House does far more than that. It’s an elegant mystery—written with wit, style, and heart—and Jane Wunderly is an unforgettable sleuth. Erica Neubauer’s debut is an absolute delight.”
—Hilary Davidson, Anthony Award–winning author of Don’t Look Down

“Murder at the Mena House is impossible to put down. A pitch-perfect mystery, with an exotic locale, and an unforgettable main character I hope to encounter again in future books. Erica Neubauer has created one of the most impressive debut novels I’ve read.”
—Alex Grecian, author of The Saint of Wolves and Butchers

Erica Ruth Neubauer spent eleven years in the military, nearly two as a Maryland police officer, and one as a high school English teacher, before finding her way as a writer. She has been a reviewer of mysteries and crime fiction for publications such as Publishers Weekly and Mystery Scene Magazine for several years, and she’s a member of Sisters in Crime and Mystery Writers of America. Erica Ruth lives in Milwaukee, WI.
Loading...
or
Not Currently Available for Direct Purchase