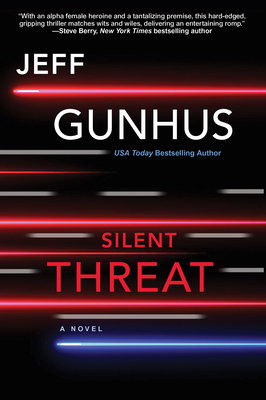 “Super-high stakes, super-high concept, and super-charged action. This propulsive spy thriller changes all the rules—it will have you holding your breath until you discover the final shocking truth. Jeff Gunhus is a terrific talent.”
—Hank Phillippi Ryan, national bestselling author of The Murder List

A father charged with treason. A daughter sent to kill him. A shocking conspiracy that changes all the rules of the spy game for a new generation . . .

With more than a dozen kills under her belt, ex-Marine Mara Roberts is one of the Agency’s most reliable assassins. But her latest target—a convicted traitor about to be released from prison—is different than her other marks. He’s a former agent who betrayed his country. He’s responsible for the death of Mara’s mother. And he happens to be Mara’s father . . .

Scott Roberts knows that his daughter was sent to kill him. He realizes he has only one chance to change her mind, to convince her that he’s been framed for treason—and that every member of their family are pawns to be sacrificed, one by one. Mara isn’t sure she can trust her father. He is a master of manipulation, as ruthless as he is resourceful. But when her nephew is abducted, she agrees to follow Scott’s lead and expose the global elites who are pulling the strings. But first, they must infiltrate the highest levels of power. Then, they must attempt the unthinkable: Kidnap the President of the United States . . .

“Daddy issues? Silent Threat is the book for you. When CIA assassin Mara Roberts is tasked with taking out her hit man father, a passionate, powerful story unfolds—part thriller, part family saga—and all guns blazing. Gunhus’ gift of capturing the human spirit leaves you pondering the novel long after you whip past the final page. Unputdownable.”
—K.J. Howe, international bestselling author of Skyjack

Jeff Gunhus is a USA Today bestselling author who has both self-published and released books with Thomas & Mercer and Hyperion. Gunhus writes thrillers and horror for adults, fantasy for middle-graders, and picture books for children. His books have been Foreword Reviews Book of the Year Finalists, Bronze Medal, and Gold Medal winners. Visit him online at www.JeffGunhus.com.
Loading...
or support indie stores by buying on