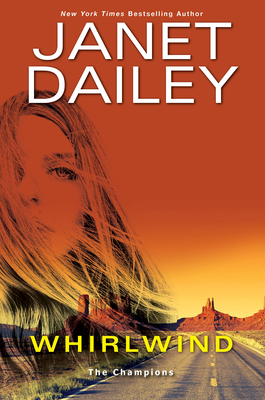 A Thrilling Novel of Western Romantic Suspense (The Champions #1)

With over 325 million books sold, Janet Dailey is a legend in romance. Now she launches a series for a new generation of empowered women loaded with suspense, action, and desire!

“A suspenseful story that keeps you on the edge of your seat…a must-read.”
—Fresh Fiction

At the Alamo Canyon Ranch, set amid the desert foothills of Southern Arizona, the Champion women carry on the family legacy of breeding bucking bulls for the rodeo. In a world where bloodline is everything, love is the only risk worth taking…

Everyone’s talking about Whirlwind at this year’s Professional Bull Rider’s Competition. But the promising young bull is the last thing on Shane Tully’s mind once he lays eyes on the lady responsible for bringing Whirlwind to the arena. Beautiful, smart, and sexy as hell, Lexie Champion has this rodeo man hungry for more than the thrill of his next competition. But the daughter of bull rancher Bert Champion wants nothing to do with a daredevil, despite the powerful attraction between them…

After losing her beloved brother to a bull riding accident, Lexie is no stranger to the dangers of rodeo life. Which is why resisting Shane’s rugged allure should have been easy. But nothing is simple about her reaction to the handsome cowboy, from their first kiss, to the terrifying moment Lexie watches Shane go down in the ring. Faced with a devastating decision, will Lexie make the ultimate sacrifice for the sake of love?

JANET DAILEY’s first book was published in 1976. Since then she has written more than 100 novels and become one of the top-selling female authors in the world, with 325 million copies of her books sold in nineteen languages in ninety-eight countries. She is known for her strong, decisive characters, her extraordinary ability to recreate a time and a place, and her unerring courage to confront important, controversial issues in her stories. To learn more about Janet Dailey and her novels, please visit www.JanetDailey.com or find her on Facebook at Facebook.com/JanetDaileyAuthor.
or support indie stores by buying on
Copyright © 2020 American Booksellers Association