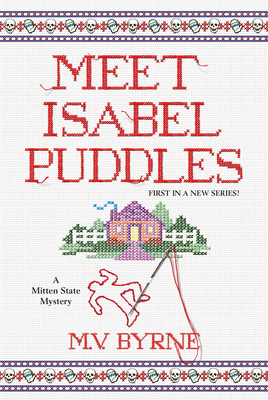 Veteran television writer M.V. Byrne debuts with the first Mitten State Mystery featuring Jill-of-all-trades Isabel Puddles, a widowed mother of two grown children who lives in the tiny hamlet along Lake Michigan where she grew up. The only thing she loves as much as her quirky hometown is reading a good murder mystery, but until she takes a side job styling hair at the local funeral home, she never thought she'd be living in one!

The only thing widow Isabel Puddles loves as much as her hometown of Gull Harbor on the shores of Lake Michigan is cozying up to a good mystery--but she never expected to be caught in the middle of one...

To the tourists and summer residents, Kentwater County is a picturesque community of small-town charm, fruitful farmland, and gorgeous freshwater beaches. To middle-aged widow Isabel Puddles, it's where she enjoys breakfast every morning at a local café with her childhood best friend and spends her evenings cozying up with a good book and her devoted Jack Terrier, Jackpot. In between, Isabel makes ends meet through a variety of trades--preserving pickles, baking pies, working the counter at her cousin's hardware shop, and occasionally helping "fix-up" the hair of corpses at the local funeral parlor.

When Isabel discovers a two-inch nail embedded in the skull of Earl Jonasson, it seems the octogenarian may not have died of a stroke. His son is quickly arrested when his alibi doesn't check out. But Isabel has known Earl Jr. since they were kids and can't believe he'd murder his own father, regardless of his financial difficulties. As gossip about Earl Sr.'s land and insurance policy money starts to spread around the county, Isabel finds herself conducting her own investigation to clear her friend's name. But real detective work isn't like Jessica Fletcher's Murder She Wrote mysteries, and she's meeting dangerous suspects who don't like Isabel poking around in their business...

M.V. Byrne was born in East Lansing, Michigan and grew up in the San Francisco Bay Area, although he spent his summers on Lake Michigan with family. He later returned to East Lansing to attend Michigan State University. After years of living in both NYC and LA, he has settled in LA full time where he continues to work as a writer/producer in unscripted TV, though he can now add the job title of “Author” to his resume. He’s currently working on the next Isabel Puddles Mystery. He can be found online at MVByrne.com.
Loading...
or support indie stores by buying on