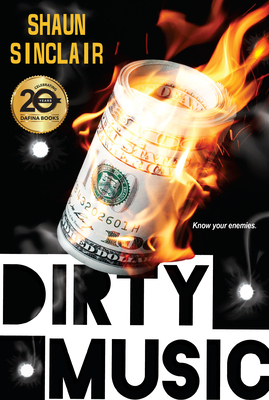 He built an empire from his infamous Dirty South crew’s street riches. He’s an unstoppable force in the music business. But when an even more powerful rival guns for his kingdom, can anyone survive to rule?

The Crescent Crew’s success is about to become legendary. Between unprecedented business maneuvers and brilliant street-based strategy, their former founder, Qwess, is on the verge of creating the biggest independent label in music. But when Qwess’ hottest superstar makes a reckless play for the Queen of R&B, it ignites an all-out war between Qwess and his New York-based counterpart, ruthless rap mogul Diamond. Now, with the police closing in and Diamond poised to finish Qwess for good, it’s too late for justice, peace—or any reconciliation. This is Dirty music and the game just got dirtier.

Praise for The Crescent Crew series

“Suspenseful and twisting. . . . Watch for future titles from Sinclair in the Crescent Crew series.”
—Booklist

“Shaun Sinclair taps into the new code and DNA of black and urban life in America, where there’s one foot in the rap game and another foot still out in the mean and hungry streets of capitalism.”
—Omar Tyree, New York Times bestselling author and creator of The American Disease ebook series

“A bone-chilling tale that will keep the readers longing for more, while reevaluating every choice they make.”
—NeNe Capri, author of The G Street Chronicles

Shaun Sinclair is the author of Sex Mogul, Forbidden, and Skin Deep, a series of gangsterotica that seamlessly blends crime fiction with erotica. A native of Atlantic Beach, South Carolina, the Army veteran worked as a law clerk for six years and now uses his experiences to make his stories pop with authenticity. He is also a contributor to the legendary Don Diva Magazine, where he mixes social commentary with his love for hip-hop culture. Visit him online at ShaunSinclair.com.
Loading...
or support indie stores by buying on