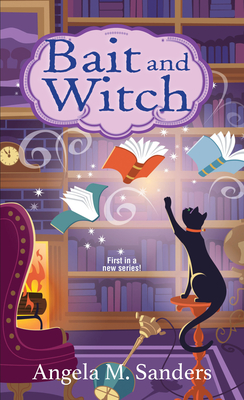 Librarian Josie Way moved to small-town Oregon to lay low. Instead, thanks to newfound magic abilities—and a killer on the loose—she’s leapt out of the frying pan and into a cauldron of trouble . . .

Josie Way loved working among the Library of Congress’s leather-scented stacks—until she uncovered corruption and made herself a target. As Wilfred, Oregon’s new librarian, Josie can stay undercover until the case goes to court. But life in this little town isn’t as subdued as she expected. The library, housed in a a Victorian mansion, is slated to be bulldozed. Still digesting the news that her safe haven is about to become scrap lumber, Josie discovers a body in the woods . . .

Almost as shocking, Josie learns that she’s descended from a long line of witches—and her powers have suddenly sprung to life. With help from a spoiled alley cat who just may be her familiar, Josie’s thumbing through a catalog of suspects, hoping she can conjure a way to save her library—and her life. . .

“A D.C. librarian caught in a political scandal hides out in a small-town Oregon library job that deepens her connection to books in uncanny ways…Zippy and fun, with just enough ambiance to satisfy readers seeking spooks and humor.”
—Kirkus Reviews

Angela M. Sanders writes the Amazon bestselling Joanna Hayworth Vintage Clothing Mysteries and The Booster Club Capers. Under the pen name Clover Tate, she’s the author of the Kite Shop Mysteries (Berkley), which Romantic Times praised for their “well written wit and intrigue.” Angela’s articles on food, personalities, and perfume have appeared in a variety of magazines, and her monthly newsletters have nearly 2,000 subscribers. She interacts with readers on Facebook and Instagram, and is a prominent blogger for Now Smell This, which garners 1.5 million monthly page views. Angela has two cats—one of whom is black of course—a witch’s freckle in her left eye, and learned to read tarot cards from a pagan priestess.
Loading...
or support indie stores by buying on