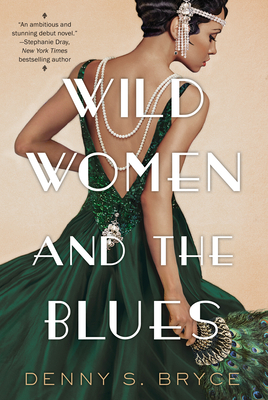 Wild Women and the Blues

A Fascinating and Innovative Novel of Historical Fiction

"Perfect for fans of The Seven Husbands of Evelyn Hugo...a dazzling depiction of passion, prohibition, and murder.“ —Shelf Awareness

“The music practically pours out of the pages of Denny S. Bryce's historical novel, set among the artists and dreamers of the 1920s.” —OprahMag.com

In a stirring and impeccably researched novel of Jazz-age Chicago in all its vibrant life, two stories intertwine nearly a hundred years apart, as a chorus girl and a film student deal with loss, forgiveness, and love…in all its joy, sadness, and imperfections.

“Why would I talk to you about my life? I don't know you, and even if I did, I don't tell my story to just any boy with long hair, who probably smokes weed.You wanna hear about me. You gotta tell me something about you. To make this worth my while.”

1925: Chicago is the jazz capital of the world, and the Dreamland Café is the ritziest black-and-tan club in town. Honoree Dalcour is a sharecropper’s daughter, willing to work hard and dance every night on her way to the top. Dreamland offers a path to the good life, socializing with celebrities like Louis Armstrong and filmmaker Oscar Micheaux. But Chicago is also awash in bootleg whiskey, gambling, and gangsters. And a young woman driven by ambition might risk more than she can stand to lose.

2015: Film student Sawyer Hayes arrives at the bedside of 110-year-old Honoree Dalcour, still reeling from a devastating loss that has taken him right to the brink. Sawyer has rested all his hope on this frail but formidable woman, the only living link to the legendary Oscar Micheaux. If he’s right—if she can fill in the blanks in his research, perhaps he can complete his thesis and begin a new chapter in his life. But the links Honoree makes are not ones he’s expecting...

Piece by piece, Honoree reveals her past and her secrets, while Sawyer fights tooth and nail to keep his. It’s a story of courage and ambition, hot jazz and illicit passions. And as past meets present, for Honoree, it’s a final chance to be truly heard and seen before it’s too late. No matter the cost...

“Immersive, mysterious and evocative; factual in its history and nuanced in its creativity.” —Ms. Magazine

Praise For Wild Women and the Blues: A Fascinating and Innovative Novel of Historical Fiction…

Praise for Wild Women and the Blues

"Perfect for fans of The Seven Husbands of Evelyn Hugo...a dazzling depiction of passion, prohibition, and murder set in the night club scene of 1925 Chicago.“
—Shelf Awareness

“The music practically pours out of the pages of Denny S. Bryce's historical novel, set among the artists and dreamers of the 1920s.”
—OprahMag.com

“All the glitz and glamour of Jazz Age Chicago, along with all the mob violence, is artfully described by the Bryce in this richly told, historical fiction debut.”
—Booklist

“The author deftly weaves fiction with reality and paints a vibrant picture of the sparkling yet seedy era…Perfect for fans of light historical fiction led by a complex heroine.”
—Kirkus Reviews

“The music practically pours out of the pages of Denny S. Bryce's historical novel, set among the artists and dreamers of the 1920s.”
—OprahMag.com

“Immersive and exciting, Denny S. Bryce’s Wild Women and the Blues [is] a vibrant novel that gathers elements of Chicago’s jazz past together.”
—Foreword Reviews

“Bryce takes readers from Roaring Twenties Chicago to the 21st century, in a riveting tale that speaks of ambition, forbidden love and courage.”
—Palm Beach Post

“This is the best kind of historical novel: immersive, mysterious and evocative; factual in its history and nuanced in its creativity and connection to the present.”
—Ms. Magazine

“Denny did her research and it shows: she accurately includes notable historical figures within the story line and provides a list of additional titles for further reading. The small details describing the experience of a Black Chicagoan in the 1920s (from dress and entertainment to slang and the sense of community) create a vivid background for this cast of engaging characters. The slowly revealed mysterious connections between families tie the book’s two time periods together. VERDICT Readers looking for solid historical fiction or complicated relationships, or to gain new insights into underrepresented points of view, will enjoy this book.”
—Library Journal

“The author deftly weaves fiction with reality and paints a vibrant picture of the sparkling yet seedy era…Perfect for fans of light historical fiction led by a complex heroine.”
—Kirkus

“This vivid historical novel will satisfy those who were transfixed by Ma Rainey’s Black Bottom, the Netflix adaptation of August Wilson’s play. Novelist Bryce, a former marketing executive who now covers books for NPR, takes an original slant to conjure the gritty blues scene of Jazz Age Chicago.”
—Everything Zoomer

Denny S. Bryce is the award-winning author of historical fiction novels including Wild Women and the Blues and In the Face of the Sun. A former professional dancer and public relations professional, she now is an adjunct professor in the MFA program at Drexel University, a book critic for NPR, and a freelance writer whose work has been published in USA Today, Harper’s Bazaar, and FROLIC Media. She is a member of the Historical Novel Society, Women’s Fiction Writers Association, and Tall Poppy Writers. Originally from Chicago, she now resides in Savannah, Georgia and can be found online at DennySBryce.com.

1. When was The Jazz Age? Do you have any favorite musicians from the period?

2. Oscar Micheaux was one of several black filmmakers who produced “race films.” These films starred black actors and actresses who portrayed characters that weren’t featured in Hollywood’s racist stereotypes. How do you think the race films of the 1920’s – 1940’s may have set the stage for the Blaxploitation films of the 1970s? (Coffey, Shaft, Cleopatra Jones, Superfly).

3. The music of the Jazz Age is thought to be the soundtrack of the Roaring Twenties. What music forms do you think have defined other generations?

4. Was Honoree Dalcour a “New Negro” or naturally resourceful and stubborn about what she valued about her life in Chicago?

5. How did you feel about Honoree taking in the homeless Bessie Palmer? Was it an act of kindness or frustration with the other chorus girls at Miss Hattie’s Garden Cafe? Toward the end of the novel, did Honoree feel genuine affection for Bessie or more of an obligation to her pregnant roommate?

6. In 2015, Sawyer’s depression was a complicated response to the loss of his sister and his estranged relationship with his father. Why do you think he is so haunted by his sister? Would he be better able to deal with his grief and guilt with a more supportive family?

7. Oscar Micheaux made more than 40 films, though many were lost. One of Micheaux’s films, “Within Our Gates,” was released in 1920 and called by some a response to D.W. Griffith’s “Birth of A Nation,” a film cited as heightening the visibility (and acceptance) of the Klu Klux Klan while promoting a negative image of African Americans. What film(s) would you credit as impacting public opinion about an individual/group or political issue? (Think about the 1936 film “Reefer Madness” or propaganda films of World War II, for example).