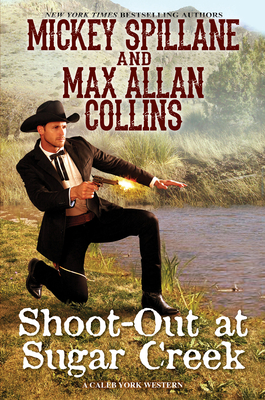 Legendary crime writer Mickey Spillane's celebrated tin-star hero Caleb York returns in the explosive Western saga by New York Times bestselling author Max Allan Collins. This time, Sheriff York will have to keep his wits about him as he goes toe-to-toe with a powerful cattle baroness who is manipulative, clever, and out for revenge...

Inspired by the timeless Westerns of John Wayne and the hardboiled heroes of classic crime fiction, bestselling legends Mickey Spillane and Max Allan Collins turn up the heat on their tin-star tough guy Caleb York--in a gun-blazing showdown with two women ranchers calling the shots...

It starts with an abusive, drunken young scoundrel who resists arrest, holds a barmaid hostage, and gets what he deserves from the blazing .44 of Sheriff Caleb York. The New Mexico lawman doesn't regret taking such deadly action, but the late youth's powerful mother, cattle baroness Victoria Drummond, seems bound to feel differently. To York's surprise, Victoria takes the news with stoic resignation--all she asks of him is a favor: help her convince Willa Cullen--the love of Caleb's life--to sell her the spread that Willa's late father had carved out of the wilderness.

Willa, every bit as strong-willed as her rival, refuses to give up her land without a fight. Sheriff York anticipates an ugly showdown brewing with himself in the dangerous middle. And before he can stop it from escalating, the seductive cattle queen sends an army of hired guns to Sugar Creek, the sole source of water available for Willa's herd. York finds himself caught in the crossfire of a savage shoot-out between Willa's cowboys and Victoria's gunfighters. No matter who wins, it's going to be a bloodbath...

In a climax in the tradition of Spillane's classic I, the Jury, York must face a beautiful deadly female who promises heaven but intends hell, while the devils in her employ plan to remove Caleb York from God's good earth.

Praise for the Caleb York Westerns

“A straight-ahead, story-driven Western about captives held by bad men in a ghost town called Hell Junction. It is a straight-shooting, two-fisted Western that will satisfy fans of the genre while paying homage to the Spillane legacy.”
—True West on Last Stage to Hell Junction

“Max Allan Collins is the closest thing we have to a 21st Century Mickey Spillane.”
—This Week

“Collins does a fine job of creating a realistic environment and some pretty darned interesting characters.”
—Booklist on The Bloody Spur

“The authors have created a protagonist larger than life—he usually comes through each conflict without a scratch—who delivers all the cheeky dialogue and comebacks…This book will not disappoint.”
—Library Journal on The Legend of Caleb York

“Using characters created by Mickey Spillane, Max Allan Collins pays tribute to the mythic West and casts an informed eye on the end of an era in The Bloody Spur.”
—True West

“There are plenty of twists and turns here, as York takes advantage of a break here, some luck there and an unexpected ally who may well figure in potential future installments. In the meantime, those delving into this fine work quickly find that there is no good place to stop reading short of the last page. What higher praise is there for a book than that?”
—Bookreporter on Last Stage to Hell Junction

“As always, Collins’ prose is just as smooth and fast-flowing as can be, and his characters are interesting, including the villains…If you’re looking for good, solid traditional Westerns with a hardboiled edge, I highly recommend Last Stage to Hell Junction and the other Caleb York novels.”
—James Reasoner, Rough Edges blog

Mickey Spillane is the legendary crime writer who created Mike Hammer (I, the Jury; Kiss Me Deadly). Before his death at the age of 88 in 2006, Spillane chose long-time friend Max Allan Collins to complete his unfinished works and act as his literary executor.

Max Allan Collins, Shamus-Award winner and 2017 Mystery Writers of America Grand Master Edgar Award-winner, is the New York Times bestselling author of fiction, nonfiction and graphic novels, including Road to Perdition, which was adapted into the Oscar-winning film starring Paul Newman and Tom Hanks. He is the author of many popular mysteries, including Quarry, which was adapted into a Cinemax original crime drama series. He and his wife also coauthor the acclaimedTrash 'n' Treasures cozy mystery series under the name Barbara Allan. In addition to writing, Collins is a filmmaker and createdthe documentary Mike Hammer's Mickey Spillane. He lives in Iowa and can be found online at MaxAllanCollins.com.
Loading...
or
Not Currently Available for Direct Purchase