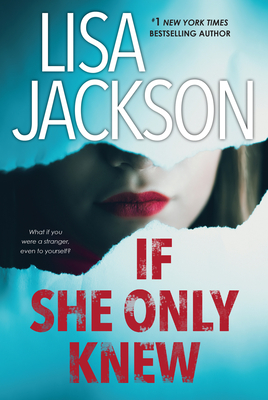 If She Only Knew

A Riveting Novel of Suspense (The Cahills #1)

From New York Times Bestselling author and Queen of Suspense, Lisa Jackson, comes If Only She Knew, a novel that will having you holding your breath as you turn each page. Perfect for readers of The Silent Patient and Then She was Gone!

If She Only Knew, introduces the Cahills, a wealthy San Francisco family—rich in money, twisted secrets, and hidden agendas. Now at the center of their tangled world is Marla Cahill—a woman with no memory of who she is, what she’s done, or why she could be the next to die . . .

It begins on a dark stretch of highway in northern California. Caught in a blinding glare of headlights, two vehicles swerve and crash—leaving one woman dead, and another in a coma. When the surviving woman awakens, her memory is gone and her face has been reconstructed. Her family tells her that her name is Marla Cahill—but they’re all strangers to her.

Recuperating in her isolated San Francisco mansion, Marla waits for something to trigger recognition. Yet the only thing she’s left with is the unshakable feeling that she is not who everyone says she is, and that something is very, very wrong. Marla knows her life isn’t just different—it’s in danger. And as her fear builds, a killer waits for the perfect moment to strike—the moment Marla remembers . . .

LISA JACKSON is the #1 New York Times bestselling author of more than seventy-five novels, including Paranoid; Liar, Liar; One Last Breath; You Will Pay; After She’s Gone; Close to Home; Tell Me; Deserves to Die; You Don’t Want to Know; Running Scared; and Shiver. She has over thirty million copies of her books in print in nineteen languages. She lives with her family and three rambunctious dogs in the Pacific Northwest. Readers can visit her website at www.lisajackson.com and find her on Facebook.
Loading...
or support indie stores by buying on