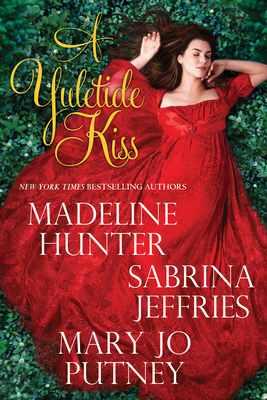 
THE UNEXPECTED GIFT by Madeline Hunter
Jenna Waverly has closed her inn, anticipating a blissfully quiet Christmas, until a snowstorm brings the first of several strangers to her property. Lucas Avonwood, as charming as he is secretive, is on a mission to track down a scoundrel, but the inn’s lovely owner is giving him a more compelling reason to stay…

WHEN WE FINALLY KISS GOOD NIGHT by Sabrina Jeffries
When Flora Younger first met Konrad Juncker, she thought she’d found her match, only to have her hopes dashed. Konrad is now a famous playwright whose plays Flora has secretly panned in reviews. But a chance meeting in a secluded inn may help them rewrite this star-crossed romance…

WHEN STRANGERS MEET by Mary Jo Putney
Kate Mcleod is shocked to find that her fellow guest in the snowbound inn is the dashing soldier who may or may not be her husband. Daniel Faringdon barely remembers that long-ago night when he rescued her from disaster, but the desire they discover now will be impossible to forget, or to ignore . . .

Mary Jo Putney is a New York Times and USA Today bestselling author who has written over sixty novels and novellas. A ten-time finalist for the Romance Writers of America RITA® award, she has won the honor twice and is on the RWA Honor Roll for bestselling authors. In 2013 she was awarded the RWA Nora Roberts Lifetime Achievement Award.  Though most of her books have been historical romance, she has also published contemporary romances, historical fantasy, and young adult paranormal historicals. She lives in Maryland with her nearest and dearest, both two and four-footed. Visit her at MaryJoPutney.com.


Sabrina Jeffries is the New York Times bestselling author of more than fifty novels and works of short fiction (some written under the pseudonyms Deborah Martin and Deborah Nicholas). Her writing has been published in more than twenty-one languages and there are over nine million copies of her books in print. A four-time RITA® Award-finalist, Jeffries has won the Holt Medallion Award, the Maggie, and the Booksellers' Best Award. After earning her Ph.D. in English Literature from Tulane University, she chose writing over academics, and now her sexy and humorous historical romances routinely land on the New York Times and USA Today bestseller lists. Sabrina lives in North Carolina with her husband and adult son, who has inspired her to actively champion the cause of autistic children. Visit her online at SabrinaJeffries.com.

Madeline Hunter
is a New York Times bestselling author with more than six million copies of her books in print. A member of RWA’s Honor Roll, she has won the RITA Award twice and been a finalist seven times. Her books have appeared on the bestseller lists of The New York Times, USA Today, and Publishers Weekly, and have been translated into thirteen languages. She has a PhD in art history, which she has taught at the university level.  Madeline loves to hear from her readers, and can be reached through her Website at MadelineHunter.com, on Facebook, Facebook.com/MadelineHunter/, and at Twitter.com/MadelineHunter.