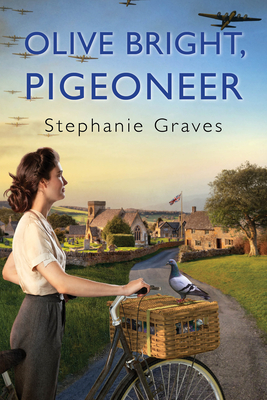 "Charming and exciting...the perfect cozy mystery, with a brilliant heroine you’re sure to adore."—Apple Books, Best of the Month Selection

Set in a charming British village during World War II, Stephanie Graves’ debut mystery introduces Olive Bright, a spirited young pigeon fancier who finds herself at the heart of a baffling murder. . . .

Though war rages across mainland Europe and London is strafed by German aircraft, the little village of Pipley in Hertfordshire bustles along much as it always has. Adrift since her best friend, George, joined the Royal Air Force, twenty-two-year-old Olive Bright fills her days by helping at her father’s veterinary practice and tending to her beloved racing pigeons. Desperate to do her bit, Olive hopes that the National Pigeon Service will enlist Bright Lofts’ expertise, and use their highly trained birds to deliver critical, coded messages for His Majesty’s Forces.

The strangers who arrive in Pipley are not from the NPS. Instead, Jameson Aldridge and his associate are tied to a covert British intelligence organization known as Baker Street. If Olive wants her pigeons to help the war effort, she must do so in complete secrecy. Tired of living vicariously through the characters of her beloved Agatha Christie novels, Olive readily agrees. But in the midst of her subterfuge, the village of Pipley is dealing with another mystery. Local busybody Miss Husselbee is found dead outside Olive’s pigeon loft. Is the murder tied to Olive’s new assignment? Or did Miss Husselbee finally succeed in ferreting out a secret shameful enough to kill for? With the gruff, handsome Jameson as an unlikely ally, Olive intends to find out—but homing in on a murderer can be a deadly business . . .

“Olive Bright, Pigeoneer is the perfect escape read for troubled times. The classic village mystery with its quirky cast of characters, including pigeons, plus the heightened danger of WWII.”
—Rhys Bowen, New York Times bestselling author of the Royal Spyness mysteries plus the #1 international bestselling The Tuscan Child

“From literary-themed pigeons to a cozy village seething with dark secrets and populated by a delightful cast of characters, Olive Bright, Pigeoneer is fresh, original, and sure to enchant. An absolute winner!”
—Deanna Raybourn, New York Times bestselling author of A Murderous Relation

"Stephanie Graves’ debut novel is utterly charming, written in the spirit of the best classic mysteries and peppered with delightful literary references. Its daring heroine, Olive Bright, who is equal measures smart, bold, and quirky, leads a cast of unforgettable characters readers will take to in an instant. A marvelous read."
—Tasha Alexandra, NYT bestselling author of In the Shadow of Vesuvius

Stephanie Graves is the author of Olive Bright, Pigeoneer, as well as four novels under the pseudonym Alyssa Goodnight. As a graduate of The University of Texas at Austin, she worked in Austin as a product engineer on automotive application microcontrollers before returning to Houston and becoming the mom of two boys. She is a self-professed connoisseur of British mysteries of all sorts and has done extensive research on the little-known role of pigeons during the war, as well as the Special Operations Executive, particularly their school for sabotage, Station XVII: Brickendonbury Manor. Please visit her online at MsStephGraves.com.
Loading...
or
Not Currently Available for Direct Purchase